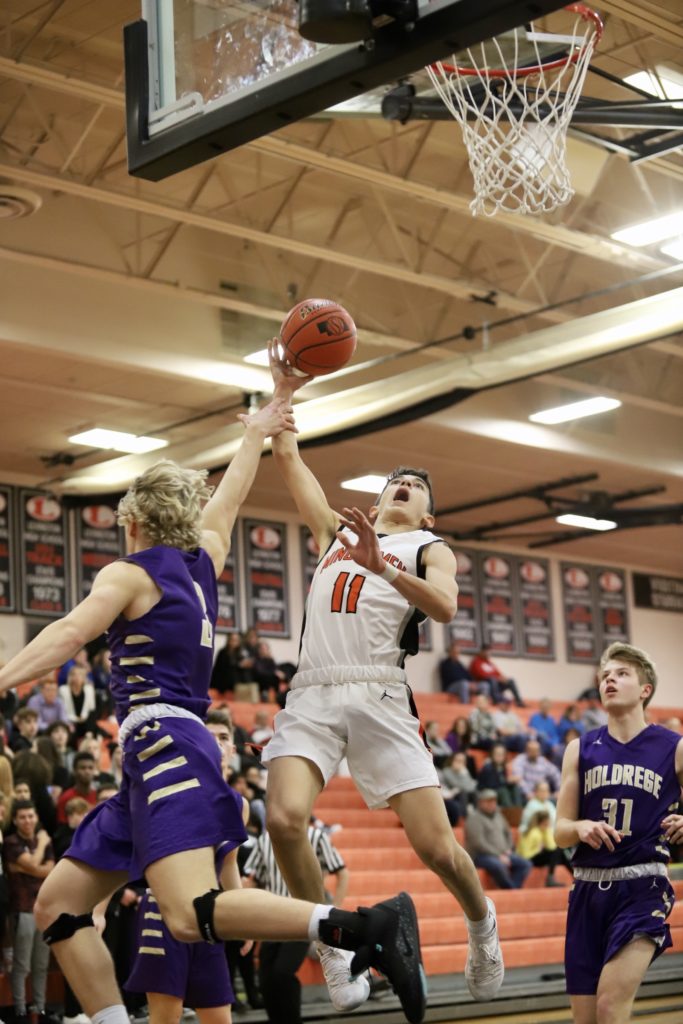 The Minutemen pulled away from Holdrege with a big first half, outscoring the Dusters by 21. Lexington continued to cruise into the final quarters, winning 73-50 and moving on to face Grand Island Northwest on Thursday in the semifinal round of the Central Conference Tournament.

The Dusters did get out to an early lead, confusing Lexington and trading points into a 5-4  advantage early in the first quarter, but after a timeout it was all Minutemen as they exploded for 21 points in the quarter.  Richman played impressively, ending the quarter with 7 points. Christian Dominguez added 6, also.

The second quarter was much of the same as Holdrege soon found themselves into foul trouble, allowing Lexington into the bonus early on. Dashton Edgren began to cut the Lexington lead with two 3 pointers in the quarter, but it wasn’t enough to slow the Minutemen who out-rebounded the Dusters and controlled the clock with extra possessions. The first half concluded with a coast-to-coast steal and left handed dunk from Dau Mach, allowing Lexington to stroll into halftime with a 43-22 halftime lead.

Lexington maintained the pace into the second half, adding 11 and 19 in the third and fourth quarters. Edgren for Holdrege continued his three point barrage, hitting another pair or triples in the third quarter. The Dusters didn’t have the firepower to keep up with Lexington in the end, falling 73-50.

The Minutemen played tough defense on the Dusters’ Jackson Hilyard, the savior for Holdrege from Monday’s thrilling victory over Schuylar. Hilyard does continue his streak of double-digit points, extending to four straight games with 12 in this contest. Jackson Hinrichs was also stifled by the Lexington D, only adding 5 points in the third quarter.

Lexington had a huge contribution from Dylan Richman who added 20 points as well as numerous hustle rebounds and steals. The Minutemen also saw additions from Eli Young (12 points), Dominguez (11), Mach (8), Austin Friedrichsen (8), and Kaleb Carpenter (5). The will play at Northwest High School on Thursday, tip off set for 7:45 PM.