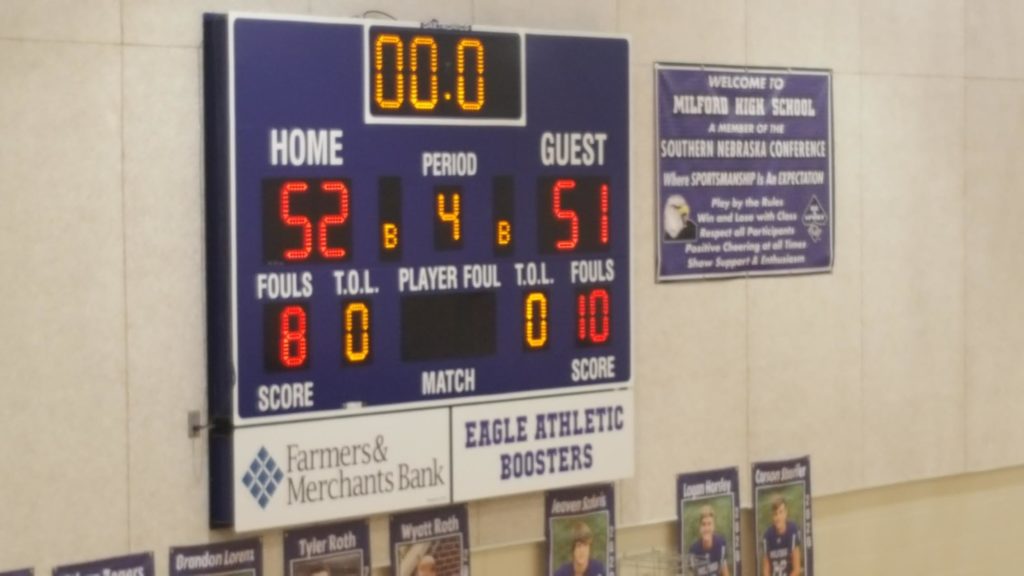 Click here to listen to podcasts of the games.

MILFORD- In girls high school basketball action Friday night in Milford, the Eagles clipped the Malcolm Clippers 51-36. Milford opened up a 16-8 first-quarter lead and held a 27-18 halftime advantage. Malcolm came alive in the second half, outscoring Milford 14-7 in the third period to close the gap to 34-32. In the final period, Milford put the clamps on the Clipper offense, holding Malcolm to just 4, while pumping in 17 points of their own to win going away. Milford (8-3) had balanced scoring in the contest, with 15 points from senior Jayla Policky, and 12 apiece from senior Nevaeh Stauffer and junior Hannah Kepler.  Malcolm was led by freshman Alyssa Fortik’s 9 points. Junior Joslyn Small scored 8, and freshman Diamond Sedlak added 6 points.

The boys game went down to the wire, with Milford junior Isaac Yeackley completing a dramatic fourth-quarter comeback by draining a three-point shot with 8 seconds left, to give the Eagles an exciting 52-51 home-court victory. The Clippers took the early lead in the contest, opening up an 18-14 first-quarter advantage. But Milford turned things around in the second quarter, outscoring the Clippers 18-9 to go into the locker room with a 32-27 lead, primarily on the strength of 15 first-half points by sophomore Seth Stutzman. In the second half, the Eagles extended their lead to 11 before Malcolm turned things around and chipped away, eventually taking a two-point lead in the final period. But they couldn’t pull away, and Milford stayed close, culminating in Yeackley’s last-minute heroics. Following Yeackley’s bomb, Malcolm had one last shot at the buzzer by Kyle Henson, that was off the mark. The victorious Eagles (7-4) were led by Seth Stutzman’s 19 points. Isaac Yeakley added 8. Malcolm (4-6) was paced by junior Malcolm Saltzman and senior Jaydin Little with 14 points apiece.
© 2020 Nebraska Rural Radio Association. All rights reserved. Republishing, rebroadcasting, rewriting, redistributing prohibited. Copyright Information
Share: