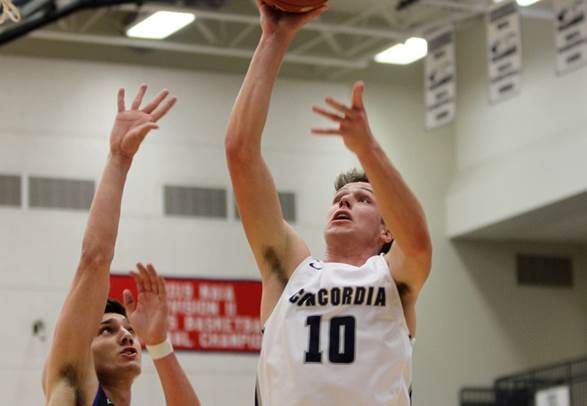 SEWARD, Neb. – A shooting percentage south of 40 wasn’t going to get the job done with the Concordia University men’s basketball team up against perennial national qualifier Dakota Wesleyan on Saturday (Dec. 7). The sixth-ranked Tigers, led by prolific scorer Ty Hoglund, emerged from Walz Arena with a 77-57 victory. They handed the Bulldogs just their second loss this season.

Head coach Ben Limback’s squad slipped to 7-2 overall (2-2 GPAC) as part of a week that included an 83-77 double overtime win over Doane on Wednesday.

“They do a good job of preventing you from getting it inside in the paint,” Limback said. “I felt like we had some really good looks this game. We just didn’t make them. Again, we have to struggle through that. We have to continue to guard and play defense. I thought we did a better job on Hoglund after the first five minutes, but we have to get tough.”

The Bulldogs hung tight for the better part of 30 minutes on Saturday. They trailed by only five (49-44) with under 11:30 remaining. While Hoglund was nearly shut out in the second half, guard Nick Harden went wild for a game high 25 points – 12 of which came over the final 11 minutes and change. His surge was more than enough to lift Dakota Wesleyan to victory while Concordia sputtered on the other end.

Head coach Matt Wilber’s squad does not go deep into its bench. Harden played all 40 minutes and three other starters played at least 36 minutes. Hoglund wound up with 16 points (11 below his average) and 11 rebounds. Tyson Smiley poured in 15 points and Tristan Teichmeier chipped in 14. The Tigers only attempted 13 treys, but made six of them.

The task will be every bit as challenging on Wednesday when the Bulldogs will be at No. 2 Morningside (10-0, 5-0 GPAC) for an 8 p.m. CT clash in Sioux City, Iowa. The Mustangs remained undefeated by beating their intra-city rival Briar Cliff, 81-72, on Saturday.