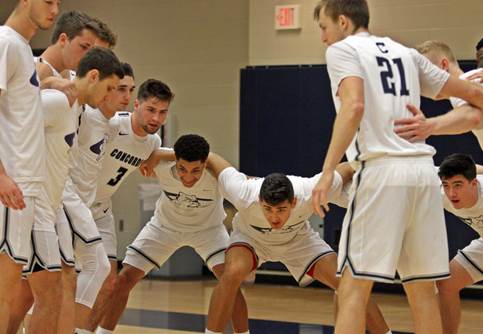 SEWARD, Neb. – The friendly confines of Walz Arena proved to be the perfect tonic for what ailed the Concordia University men’s basketball team on the offensive end. Senior Brevin Sloup put on a shooting clinic and the Bulldogs punished visiting Peru State College, 109-60, on Saturday (Dec. 28) afternoon. The Mayor poured in 20 of his 26 points in the second half.

Head coach Ben Limback’s squad quickly turned around after arriving back from the Hoop N Surf Classic in Honolulu, Hawaii, where it went 1-1. Concordia is now 9-5 overall this season.

“I felt like we were more aggressive,” Limback said. “I really liked that first half. We got rebounds and we got loose in transition. We talked about cutting better and finishing. Our spacing was better. The ball moved pretty well in the first half – we just turned it over. In the second half Brevin Sloup was amazing. Not only was he scoring, but he was making great passes.”

In terms of point totals, this was the first time the Bulldogs went over the century mark since their 102-92 upset of No. 7 Briar Cliff on Jan. 12, 2019. The program had not reached 109 points since the 109-106 overtime win over No. 7 Dakota Wesleyan on Feb. 12, 2017. This time around, the opponent did not carry a national ranking, but the performance was still quite impressive. Concordia sizzled by shooting 63.2 percent (24-for-38) from the field in the second half.

Leading 44-25 at the break, Sloup and company did not let up. The Seward High School product tore apart the Bobcats by raining home 14 points in the opening four minutes of the second half. Just for fun, Sloup even whirled a pass to Chuol Biel for a throw down that made it 62-32 with more than 15 minutes to go. It was that kind of day for the visitors, who watched one particular sequence that included a missed dunk that turned into a Sloup trey.

“I think the biggest thing was we were just really moving the ball and sharing the ball really well,” Sloup said. “In Hawaii we got stuck doing too much dribbling. Today we were moving the ball well. Guys were finding open shots and we were hitting shots. It was a lot of fun.”

Indeed, the ball movement was superb, as Concordia’s 28 assists would attest. Carter Kent (14) and Justin Wiersema (10) joined Sloup as starters to reach double figures. Off the bench, sophomore Gage Smith enjoyed a nice day by notching 13 points and six rebounds while making all five of his shot attempts. Kent dished out six assists and Sloup and Wiersema dropped five dimes apiece.

Other than a 6-0 deficit out of the gate, the Bulldogs sailed smoothly. A 15-0 run that featured nine points in a row from Kent put Concordia in control in the first half. Eventually, everyone got into the act. Thomas Young put the Bulldogs into triple digits with his second trey of the game. He was one of 13 players wearing white jerseys to register in the scoring column.

“This team is capable of that,” Limback said. “We just haven’t always made the easy plays. We challenged them at half and I certainly felt like the guys met that challenge. We ended with three turnovers in that second half and a lot of assists. It was a fun day and hopefully we can build off this now.”

The conference slate will resume in 2020 with a trip to No. 19 Northwestern (13-3, 5-1 GPAC) coming up on Thursday (Jan. 2). Tipoff from Orange City, Iowa, is set for 8 p.m. CT. The Bulldogs will attempt to snap a series losing streak of seven versus the Red Raiders.