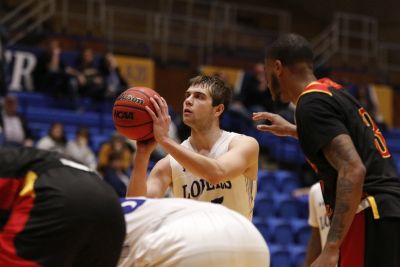 In a game with more twists and turns than a cheap garden hose, it fittingly came down to Soucie (Osawatomie, Kan.) whose career night also included 11 fouls drawn, nine rebounds, three blocks and two assists. First he teamed with two teammates on a “triple block” of Pitt junior post Antonio Givens II with 25 seconds left and UNK down 80-79. The fifth-year senior then, as he had most of the night, drove to the bucket with the game clock winding down. He went up-and-under a couple of Gorilla defenders and was fouled.

Going 1 of 2 at the line with 49 seconds remaining to make it an 80-79 score, Soucie this time nailed both freebies. Pitt had a chance to win the game but a long pass down the court was intercepted by Bellevue senior forward AJ Jackson.

“Morgan has done well all year long. I didn’t realize the kind of game he was putting together until I looked at the stat sheet and saw 35,” UNK head coach Kevin Lofton said. “You kind of start to expect it from him with the way he’s played of late. He made plays when we needed it, none bigger than the two free throws he stuck at the end.”

Soucie, whose previous career-high point total of 23 came last month against Hastings, was 14 of 23 from the field and 7 of 11 at the line. Seven of his rebounds came at the defensive end and he played just under 40 minutes. Finally he is now up to a team-best 16.5 average for the season.

“A lot of guys chipped in. Austin (Luger) gave us good minutes off the bench, AJ had a huge offensive rebound for a put back bucket early in overtime to give us the lead,” Lofton said. “We’ve been emphasizing that (play around the rim) the last five or six games. Morgan and AJ are really mobile and versatile forwards … we’re trying to utilize that in hopes that if the opponent tries to take them away by packing the paint it’ll give our perimeter guys good opportunities.”

​On a night when UNK grabbed 14 offensive rebounds and shot 54% (13 of 22) in the second half, the Lopers seemingly were in good shape up 62-53 with just 4:11 left. However the streaky Gorillas hit three triples, made two late free throws and got a bucket from senior guard A.J. Walker with five seconds remaining to tie things up at 69 and force extra time. UNK went to Soucie to win it but he couldn’t get a shot off.

Pitt was paced by a pair of “thick” forwards in Givens II (22 points, eight boards, two steals) and Christian Edmondson (14 points, nine boards, two blocks) with Walker (18) getting hot after the break.

“You have to give Pittsburg State credit. Their guards were hitting some tough threes. Coming in we knew they take tough threes … our fault was we let them to get to those spots. I think our guys got apprehensive because they were putting it on the floor, getting fouled and scoring with the clock stopped. We gave them too much air space and they hurt us with those late threes,” Lofton said.