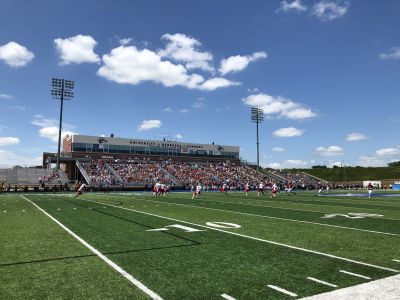 Kearney-For at least one day football returned to the heartland as UNK hosted the 62nd annual Shrine Bowl. The game was the first organized football matchup  in the United States,  since the pandemic hit in March. Behind quarterbacks Evan Johnson (Adams Central) and Aiden Oerter (Norris) the south scored 30 straight points and won it 30-6. The North scored on it’s first possession as Luke Wakehouse (Tekamah Herman) plowed his way in from two yards out to take an early 6-0 lead.

After that however, the day was dominated by the South.  Johnson would hit Husker walk-on to be Nate Boekircher (Aurora) with a 26 yard strike at the start of the second quarter to give the South a 7-6 lead.  Omaha South kicker Alan Mendoza would hit field goals of 38 and 24 yards as the South led 13-6 at half. In the 3rd quarter, Mendoza showed off his leg again as he connected from 51 yards. The South tacked on two more scores in the 4th, as  Deryk Huxoll (Cambridge) scored on 11 yard reverse, and Oerter connected with Tyler Palmer (Columbus Scotus) on a 66 yard TD strike. Medoza was named the offensive player of the game, while Jacob Ludwig (Ashland-Greenwood) was the defensive player of the game as he notched 10 tackles, 2 TFL and had 1.5 sacks. A crowd of more than 2,400 saw the game which was delayed a month due to the pandemic.