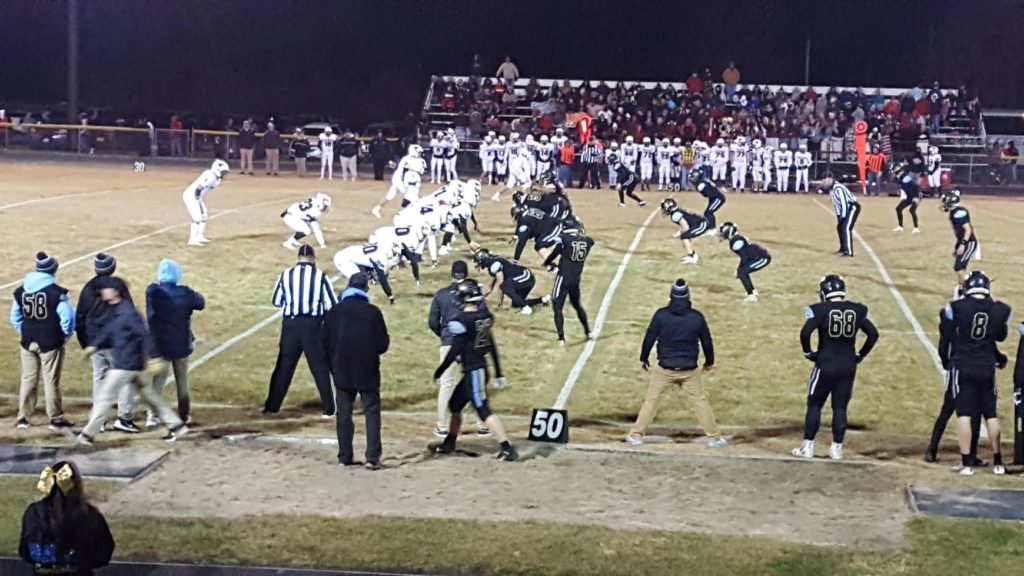 KTMX/KAWL Photo
Click here to listen to the game.
LYONS- It was a record-setting Mustang stampede Friday night in Lyons, as Sutton steamrolled to a 38-28 playoff victory over BRLD. The win puts Sutton in the Class-C2 state championship game for the first time since 2012.
While BRLD came in with a high-powered offense averaging 47 points a game, their defense was no match for the powerful Sutton ground game, which set a Class C-2 playoff record with 550 yards rushing. The Mustangs had two players with more than 200 yards rushing and averaged an outstanding 10.2 yards per carry. Senior running back Jackson Perrien, who scored twice, led the way with 250 yards on 24 carries, including a 99-yard scoring jaunt following a defensive stand in the second quarter. Junior quarterback Cade Wiseman ran for 206 yards on 23 carries and four TD’s, senior fullback Cory Carlson ran six times for 70 yards, and junior back Wyatt Bergen scampered 24 yards on his only carry of the night. Sutton did not complete a pass in the game.
The Mustang defense came up huge in the game, stopping the Wolverines at the Mustang two-yard line on consecutive drives in the first half.
Senior quarterback Will Gatzemeyer finished his outstanding career with two touchdown tosses, and ran for a touchdown as BRLD finishes the season at 10-2.
Sutton, now 11-1, will face Oakland-Craig for the C2 state championship at 2:45 pm Tuesday, November 26, at Memorial Stadium in Lincoln. The game can be heard on 104.9 Max Country.  Oakland-Craig clinched their spot in the title game with a dominating 54-13 win over previously unbeaten St. Paul.
© 2020 Nebraska Rural Radio Association. All rights reserved. Republishing, rebroadcasting, rewriting, redistributing prohibited. Copyright Information
Share:

AUDIO: Marshall Land Brokers And Auctioneers Recognized As One Of The Top Land Brokerage In The US