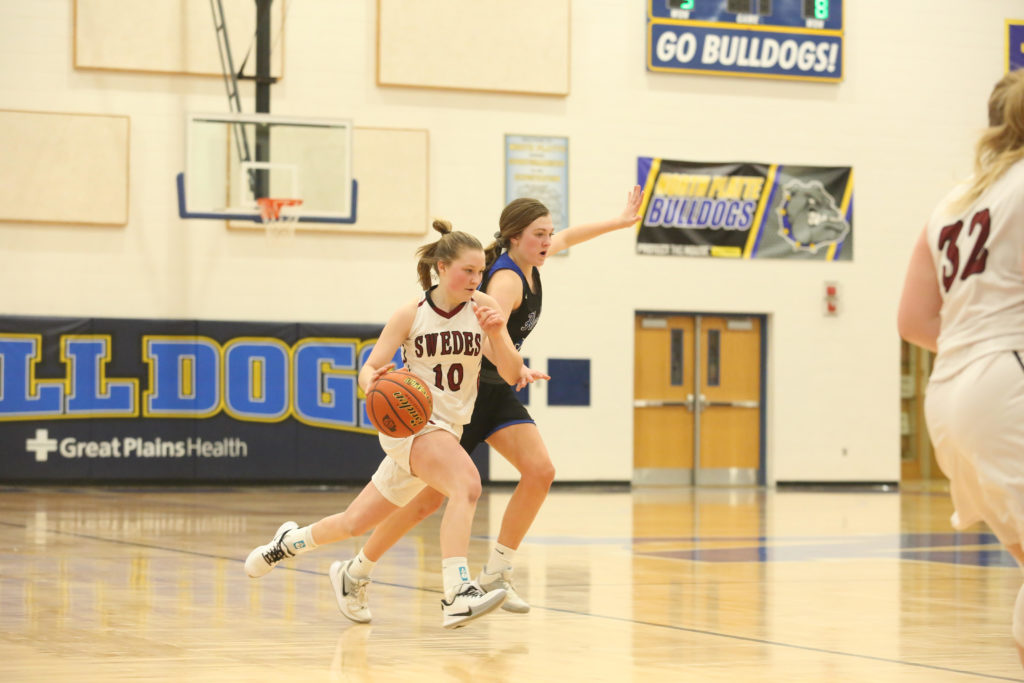 NORTH PLATTE – The Chase County Longhorns and Gothenburg Swedes were impressive in their first round victories on Tuesday to advance to the C1-11 sub-district final. The Longhorns dominated Cozad enroute to a 56-19 win. Gothenburg got a hard fought 51-38 win over Hershey to move on.

Cozad hung in there early against the a very good Chase County team. The Haymaker defense was stout, holding Longhorn Stud, Mallie McNair to just six first half points. After one quarter the score and pace was to Cozad’s liking. They found themselves only down by two points after one quarter (6-4). However, their offense failed them in the second quarter,  only scoring four points again, while Chase County went on a run and led it 22-8 at half time. From then on it, the Longhorn pressure and McNair’s appearance doomed the Haymakers. She would end up with 20 points to lead all scorers.

Megan Burkholder led the way for the Haymakers with seven points in her last game on the hard courts for Cozad. The Haymakers finish the season 4-17.

The Longhorns will advance to take on the Gothenburg Swedes who used an early surge and an opportunistic defense to win in the late game Tuesday night.

Head Coach, Brent Streeter said his team needed an early start and he got it, taking an eight point lead into the second quarter, then expanding it to 14 by halftime. At that point, the game sort of stabilized. In fact, Hershey had several opportunities to make it a game and couldn’t break through. A lot of the credit goes to a stingy defense and the stealing ability of Alexis Bliven who led the Swedes with 11 points. Nine players scored for Gothenburg as they used a balanced attack to answer any run the Panthers began.

Shayda Vaughn was the leading scorer for Hershey with 11 points. The Panters finish the season 7-14.

Kynlee Strauser finished with 9 points and was a key for the quick start by the Swedes.

The Swedes and Longhorns will play at 7 on Thursday. These two teams were supposed to meet during the regular season, however the game was cancelled because of weather.