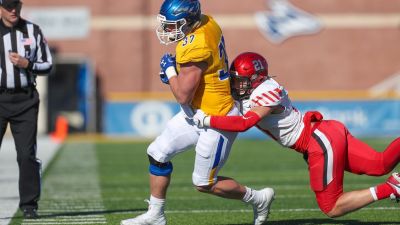 UNK kicks off season on the road-Photo Courtesy UNK Sports

Click here to listen to podcast with coach Josh Lynn

The Lopers will host league member Missouri Western State (Nov. 21) while facing Rocky Mountain Athletic Conference members Chadron State (Nov. 7) and South Dakota Mines (Nov. 14). The NCAA has determined these games will count towards season and career records (coaches and players) as official statistics are being recorded. UNK is one of just nine Division II schools playing such games this fall.

Kickoff between the Lopers and Gorillas is set for 12:05 p.m. Jayson Jorgensen and Larry Cotnoir having the call on The River 93.1 FM and 106.9 FM. Finally, live stats are available as well.

Due to COVID restrictions Carnie Smith Stadium’s capacity (11,910) was capped at approximately 25%, thus the game has been sold out.

UNK hasn’t tasted victory against Pitt since 1983, a span of 37 years and 12 games. Last fall on a rainy night at Cope Stadium the Gorillas out gained the Lopers by a 406-212 margin en route to a 37-14 win. Pitt went on to finish 6-5 and picked up a new head coach in the off season, former Toledo assistant Brian Wright. He was interim head coach at Division I Florida Atlantic in 2013, leading the Owls to four wins. UNK posted a 7-5 mark in 2019, earning the program’s fourth-ever postseason victory with a 50-33 decision against Winona (Minn.) State.