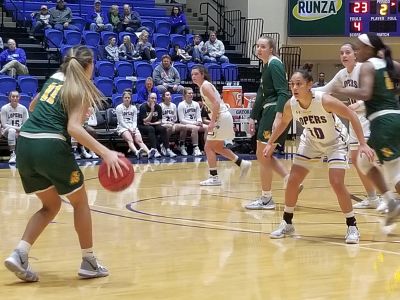 Kearney, Neb. – Graduate transfer guard Haley Simental had 22 points, six rebounds and four assists to help Nebraska-Kearney get past Missouri Southern State, 65-58, Monday night at the Health & Sports Center. With the win the Lopers (13-2, 2-2) keep the Lions (3-9, 0-4) winless in league play. This starts a busy week for UNK is it heads to Rogers State (2-12, 0-5) on Thursday night and Northeastern State (4-8, 2-3) on Saturday afternoon. To avenge a 2019 “Senior Day” loss to MSSU, UNK had strong first and fourth quarters and tallied 17 points off 14 Lions turnovers. Simental (Pueblo West, Colo.) had a big second half to the tune of 15 points and three boards.

“Defensively we were a lot better today than we were Saturday. I thought our kids stepped up to the challenge of imposing themselves a little bit more, dictating a little bit more rather than reacting,” UNK head coach Carrie Eighmey said. “We were good for about 38 minutes in that area.” “Offensively it wasn’t our best shooting or our best scoring day. I thought we left a lot of points off the board but we found a way,” Eighmey said. “I liked our resolve and just the fact we had several players step up and contribute in different ways.” Three of the Lopers seven makes in the second and third quarters came in a row and helped open up a 41-37 lead they never relinquished. First a Simental steal lead to a three by freshman reserve guard Trinity Law (Rapid City, S.D.), a Law offensive carom led to a three by freshman reserve post Madison Dreckman (Le Mars, Ia.) and then Simental drained her third and final three of the night after another MSSU miscue. 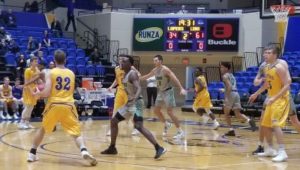 “There’s always a pivotal stretch in the game and that was definitely the stretch for us. To be able to go down and get three scores in a row and to turn them over three times … that stretched things just enough and gave us the cushion we needed,” Eighmey said. UNK then made 7 of 14 shots and 9 of 12 free throws in the fourth quarter to lead by as many as 12 points. Cozart made things interesting with three triples down the stretch but she also was 6 of 17 from the field (5 of 14 threes) to reach her 17 points. “Both Madison and Trinity gave us solid minutes and a boost off the bench,” Eighmey said. “We were giving a little bit too much space at the end. Two wouldn’t hurt us but threes were going to be able to beat us if they made too many of them.” Simental had an efficient evening, going 7 of 13 from the floor (3 of 5 threes) and 5 of 6 at the line in 35 minutes of work. She also had a plus 14 rating with all six of her boards coming on the defensive end. Next Crofton junior guard Kelsey Sanger had 11 points and four times with both Law (eight points & three boards) and Dreckman (six points & three assists) big off the bench. Finally South Dakota junior wing Klaire Kirsch had 10 boards, her fifth double digit tally of the winter. Besides Cozart, Owens had 18 points and six rebounds to lead MSSU.

Kearney, Neb. – The 18th-ranked Missouri Southern State Lions hit 11 first half three pointers and nearly got a triple double from junior post Cam Martin to beat Nebraska-Kearney, 89-77, Monday night at the Health & Sports Center. Finishing as Central Region runners up a year ago, a veteran MSSU squad improves to 11-2 (4-0) and remains in sole possession of first place in the MIAA. Meanwhile UNK (8-5, 2-2) sees a four-game winning streak come to an end. The Lions arguably played one of the best halves of basketball in the 30-year history of the Health & Sports Center. Over the first 20 minutes Mo Southern scored 61 points on 67% shooting (24 of 36) which featured a mind-boggling 11 of 14 effort from behind the arc. For good measure the Lions also were 2 of 2 at the line, plus 12 on the glass and had eight players in the scoring column. Martin (6-9, 240 lbs.) came in averaging 21 & 8 and had 16 & 6 by the break. While he missed a three, five others made at least one with fellow starters Braelon Walker and Kinzer Lambert each going 3 for 3.

“Everybody struggles to stop him (Martin). You have to pick your poison … you can run doubles at him but then they hit threes. You can try and zone them but then they hit threes. It’s pretty hard to take everything away,” UNK head coach Kevin Lofton said. “They were on fire to start the game and not matter what we tried it just didn’t work. Sometimes you run into that.” UNK showed moxie by outscoring the Lions 18-9 to start the second half and by a 43-28 margin overall. The Lopers trimmed a 30-point hole down to 16 and had a chance to cut it some more but the Lions blocked a three point attempt. “They did a job on us in the first half. We talked about that at half time and felt like we wanted to come out in the second half and just try and find a way to execute a little better, guard a little bit better,” Lofton said. “We wanted to come out and play better because the two teams we have coming up on the road are, in some ways, as every bit as good as the one we just played.”

A transfer from Jacksonville (Ala.) State, Martin ended up with 26 points, 13 rebounds, seven assists, two blocks and two steals. He was 12 of 19 from the field and 2 of 2 at the line. Walker (19) and starting Elyjah Clark (11) were the others in double figures. For UNK Utah junior Jake Walker was hot all night and ended up with a season-best 23 points on 8 of 11 (3 of 6 threes) shooting. Also going 4 of 4 at the line, he grabbed five rebounds and logged just under 31 minutes of work. Next Bellevue senior forward AJ Jackson had 15 of his 19 points in the second half while also having a career-best seven assists with Alliance junior forward Austin Luger coming off the bench to supply 14 points and four offensive boards. Finally UNK shot 54% (14 of 26) in the second half and was well under MSSU’s 21-point scoring margin coming into the night. “Our guys responded in the second half. I think we were better defensively and some of that, on the other side, you get a lead like that and it’s hard to stay focused. But our kids competed, stayed together and found a way to cut into their lead,” Lofton said. UNK heads to Rogers State (11-3, 3-2) and Northeastern State (9-5, 2-3) this weekend.