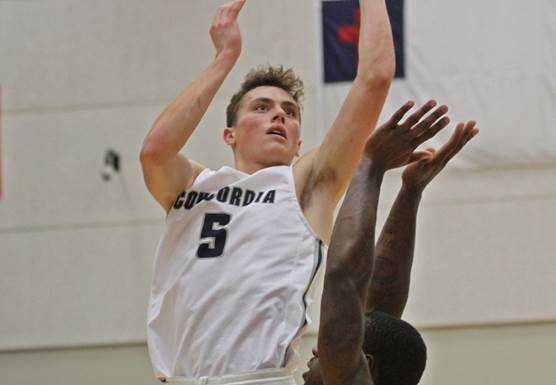 SEWARD, Neb. – So far so good in the early going for a Concordia University men’s basketball team hopeful of making some noise this winter. The Bulldogs spread things around in taking advantage of their full complement of weapons on the opening night (Nov. 1) of the 20th annual Cattle Classic. Fine play on both ends of the floor resulted in Concordia pulling away for a 90-62 win over visiting Dickinson State University (N.D.) inside Walz Arena.

“I felt like we guarded some of their leading scorers very well,” Limback said. “Carter (Kent), Tanner (Shuck) and all the guys – Ryan (Holt) as well – did a good job. We talk about playing defense and limiting them to one shot and I thought we did that tonight.”

Concordia really did a number defensively on every Blue Hawk player not named Donte Walker (19 points on 7-for-12 shooting). Walker’s splurge (nine points in a stretch of four-straight possessions) in the first half gave Dickinson State (0-1) a flicker of hope, but only for a fleeting moment. Sammy Adjei’s 12-point first half allowed Concordia to recover nicely and take a 43-32 lead to the break.

It was all Bulldogs from there. Shuck (who passed Limback for 21st on the program’s all-time scoring list) went wild in the second half and punctuated his night by throwing one down after his own steal. Shuck dropped in a team high 18 points and had plenty of help from his friends with Brevin Sloup (15), Adjei (14), Kent (14) and Sam Scarpelli (10) also reaching double figures in scoring. Scarpelli got his first start at Concordia while filling in for Justin Wiersema.

Improvement on the defensive end may wind up deciding high the Bulldogs can climb within the GPAC. On this particular night, they limited Dickinson State to 31.8 percent (21-for-66) shooting and out-muscled the Blue Hawks on the glass, 51-31. Chuol Biel just missed a double-double with his line of eight points, 13 rebounds and two blocked shots.

Scarpelli, a transfer from Clark Community College, is the most prominent newcomer to add his name to the mix this season. He’s fit in nicely thus far. Said Scarpelli, “I feel like we’re playing good basketball, but there are a lot of things we can shore up. It makes me pretty excited. We don’t feel like we’re playing as well as we can, but we’re still able to go out there and get wins. It’ll be exciting to see what we can keep going towards.”

Nick Wurm chipped in 11 points for North Start Athletic Association Member Dickinson State. It just did not get near enough offense to keep up with Concordia’s 50.7 percent shooting from the floor.

On day two of the Cattle Classic, the Bulldogs will go up against Benedictine College (Kan.), the ninth-ranked team in NAIA Division I. Tipoff on Saturday is slated for 5 p.m. CT. In Friday action, the Ravens got past Hastings, 78-76, with the help of a last-second tip in.