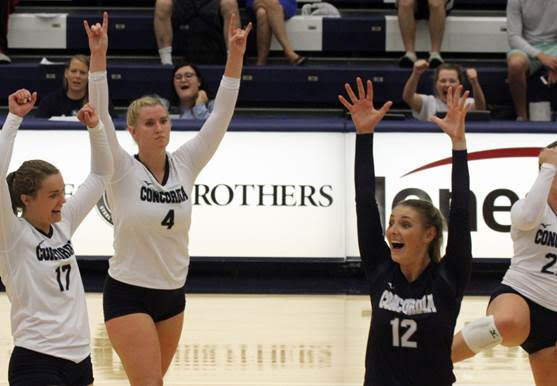 SEWARD, Neb. – The Concordia University volleyball team needed only six sets to cruise through a pair of GPAC victories this week. The Bulldogs joined the homecoming festivities on Saturday (Sept. 28) and earned a regular season sweep of 25th-ranked College of Saint Mary. In the latest matchup, Concordia put out the Flames, 25-21, 25-16, 25-19, inside Walz Arena.

At 15-2 overall (4-2 GPAC), head coach Ben Boldt’s squad has put together one of the best 17-game runs to begin a season in program history.

“I told the players not to think about the 2-0 week. Don’t get complacent,” Boldt said. “We’re talking about staying urgent and keeping the gas pedal on. That’s the biggest mentality we want for our team. We’ve got to keep that going in the GPAC because it’s a grind out there.”

The first set was competitive all the way through, but the Bulldogs exerted their will in the second and third. They smoldered on the attack by hitting .468 for the match. Setter Tara Callahan beautifully sprayed the ball around for her 35 assists. Emmie Noyd (11), Kara Stark (10), Arleigh Costello (nine) and Camryn Opfer (nine) each had nine or more kills as part of a balanced offense.

On the other side of the net, College of Saint Mary (15-8, 1-5 GPAC) hit .250. Makenna Freeman led the way with nine kills. The Flames have now lost five in a row within conference play. That streak includes the home loss to Concordia back on Sept. 11.

From the right side, the lefty Costello has emerged in a big way in recent outings. It’s been a while since the Bulldogs have felt this comfortable with such a variety of attacking weapons.

“I think it’s getting close (to our best),” Costello said. “We still have a lot of work to do with communicating, always playing our game and keeping the gas pedal on. We’re getting closer.”

The Bulldogs held a 6-3 advantage in blocks. Noyd was in on five of those denials. Concordia also displayed balance in its back row. Opfer had a team high nine digs while Kaylie Dengel (seven), Callahan (five) and Marissa Hoerman (five) were close behind. Hoerman added two service aces.

The Bulldogs will be back on the road this coming Wednesday with a short drive to Hastings (7-8, 2-3 GPAC) for a 7:30 p.m. CT matchup inside Lynn Farrell Arena. In this season’s first meeting, Concordia took care of the then 14th-ranked Broncos in four sets on Sept. 4. Hastings had won the previous eight get togethers in the series.

“That’s going to be a big game,” Boldt said. “There are going to be a lot of people there. Wednesday night’s volleyball night. We’re just looking forward to the next opponent and trying to play our best.”