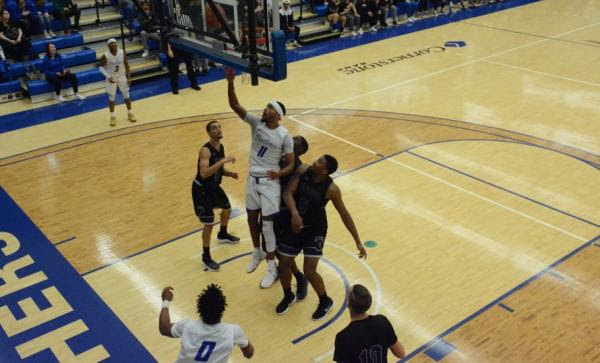 YORK – DeAnte Barnes (SR/Rockford, Ill.) became the Panthers hero last night as he had the game-winning putback with 8.2 seconds remaining to give York the 72-71 victory Wednesday night. After an Avila timeout Lance Ewell (SR/Brock, Texas) forced a turnover and the Panthers were off and running with 14 seconds. A pass to Eric Lenear (JR/Bellevue, Neb.) in the corner had a chance to put York up by two but the soft miss gave Barnes the opportunity for the rebound. He tipped it in and the Panthers ran back for defense. With no timeouts remaining the Eagles put up a desperation three, but it was short by a foot.

Barnes finished with a team-high 15 points. Tyreece Berry (JR/Muskogee, Okla.) was right behind him as the point man scoring 13 and dishing out seven assists.

The game was a close contest throughout as there were eight ties and 16 lead changes. York led by four early on in the game but the Eagles climbed back and led most of the first half. After finding themselves down by eight points with 2:51 left in the half the Panthers climbed back within one 35-36 as the half ended. DeAnte Barnes led the Panthers coming off of the bench scoring 10 first-half points.

Victor Lewis (SR/Moreno Valley, Calif.) made a three-point basket with 15:16 left in the game. That basket gave the Panthers their first lead since the 9:26 mark of the first half. But neither team was able to take over the game. York looked to grab momentum as they went up 54-49 with a 6-0 run, however a technical by Lance Ewell halted the run. The Eagles then proceeded to go on an 8-2 run of their own to tie the game up at 56.

Both teams went on runs late and the Eagles looked like they might escape with the road win as they took a three-point lead with just over two minutes to go.

York’s bench was big all night as they outscored the Eagles 31-4. York’s defense forced 21 turnovers on the night and shut down Avila’s offense in the closing minutes as they didn’t allow a field goal over the final 2:36.

The Panthers improve to 5-2 on the season and will travel to Bethany College on Saturday. Their game is scheduled for 7:00 p.m. in Lindsborg, Kansas.