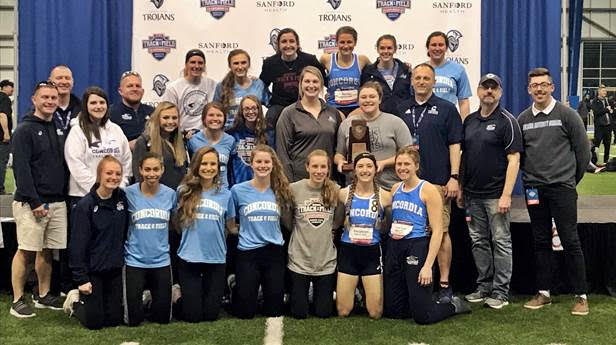 BROOKINGS, S.D. – Sophomore Rachel Battershell has capped off one of the most impressive indoor seasons ever for a Concordia University track athlete. She blazed to a school record time in the 400 meters while winning her first career national title in Saturday (March 7)’s action. Battershell accomplished that feat on the third and final day of the 2020 NAIA Indoor Track & Field National Championships in Brookings, S.D. She was one of two Concordia national champions and 12 individuals to earn All-America honors over the weekend.

From a team perspective, head coach Matt Beisel’s squads placed fourth on the women’s side (50 points) and tied for 17th on the men’s side (13 points). The GPAC champion women took home a team trophy for placing in the top four. The women put together an incredible meet that was highlighted by four school records, a national champion and four national runner up performances.

“I’m having trouble processing it all,” Beisel said. “We had an amazingly good meet and there’s a lot of emotion involved. I’m so grateful to God to be part of it. I care about these kids so much and to see it come together like this is a great feeling. These three days were the culmination of a lot of hard work. We take a lot of pride in it. I give all glory to God.

“A huge amount of credit goes to our athletes, our strength coaches, our trainer, the entire coaching staff and our administration for the resources they provide. It takes a total team effort.”

Battershell keeps pushing the boundaries of her supreme athletic gifts. As Beisel put it, she “crushed it.” The native of Wheatland, Wyo., became the program’s first female 400 meter national champion since Carol Bailey in 1990. Battershell’s time of 54.77 broke Bailey’s former school record (54.98) that had stood since 1989. The GPAC Athlete of the Year also ran the anchor led for the team’s 4×400 meter relay that galloped to another school record.

The 4×4 team included sophomores Jacee Pfeifer and Sarah Lewis and junior Mika Brees. They finished in 3:47.39 while shaving more than five seconds off their time from Thursday’s prelims. The previous school standard of 3:51.80 had been achieved a year earlier at the indoor national meet by a 4×4 that featured many of the same athletes, as well as then senior Jamie Nikodym. Brees emerged as one of the breakout stars as a late addition to the relay.

Clearly, Seward, Neb., has become a destination for elite track and field athletes. On day two (March 6) of the meet, senior Jacob Cornelio won a weight throw national title, senior Addie Shaw finished as the runner up in the women’s weight throw and senior Allie Brooks (second) and freshman Josie Puelz (third) competed fiercely for titles in the pole vault. Brooks cleared 13 feet for the third meet this season and again reset her own standard.

Shaw wound up as the highest Concordia point scorer of the weekend. She added another runner-up claim (eighth career All-America award) by tossing the shot put 47’ 8.” Shaw was responsible for 16 team points. Her mark of 64’ 4” in the weight throw on Friday surpassed her own school record in the event.

The 2020 indoor campaign leads into what figures to be a stellar outdoor season as well. One factor that limited Concordia’s national placing on the men’s side was the absence of Cody Williams (2019 heptathlon national runner up) due to injury. The outdoor season is slated to begin March 28 at the Hastings Invite.

The women are bringing home a team trophy for the first time since they won they outdoor national title in 2016. Said Beisel, “It’s such a great feeling. We’re so pumped about it. We had a lot of support here and it was great to see a lot of fans here.”