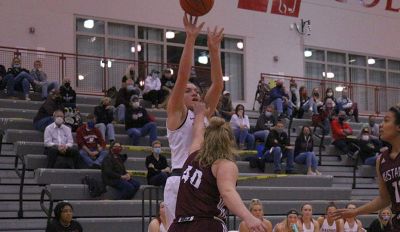 Aberdeen, SD – Allison Bauer (SO/Elm Creek, NE) picked a great time for another career afternoon as her and the Hastings College women’s basketball team ran past Presentation 84-52 on Friday afternoon.

In the first half, Presentation found out there was another player that they needed to prepare for. Bauer came into this game averaging 3.1 points per game. She scored 12 points in the first half going 4-for-5 from the floor and 3-for-3 from downtown. That already bettered her previous career high of 11 points against Morningside. Her play along with Hastings’ defense helped the Lady Broncos build a 19 point lead at halftime.

Early in the third quarter, the Saints were able to cut the deficit to 15 points at 45-30 following two Karley Sanchez free throws. From here, Hastings took the game over.

The Lady Broncos continued to keep the pressure up when Elle Danley would drain a 3-pointer followed by a bucket and a free throw from Leners to end the run with Hastings leading 60-30 with 3:11 to play in the third quarter. Hastings built its lead to as large as 39 before winning by 32 points.

Bauer led the way with her career high 22 points on 7-for-10 shooting along with going 5-of-6 from behind the arc. The seven field goals made along with the five 3-pointers made are also career highs for Bauer.

Hastings finished the game shooting 46 percent (32-for-69) compared to 33 percent (17-for-51) for the Saints. Another key stat where the Lady Broncos were struggling was rebounding coming into the game with a minus eight in rebounding efficiency. Hastings out rebounded the Saints 39-fo-29.

Hastings shot lights out from behind the arc shooting 45 percent (9-for-20) while Presentation shot just 18 percent (2-for-11).

Hastings improves to 4-7 (3-6) on the year and will be back in action Saturday Jan. 2 hitting the road to take on Jamestown with tip off set for 1:00 p.m. in Jamestown, ND. 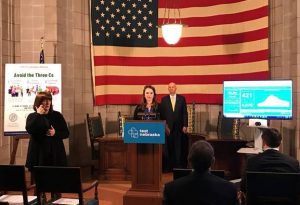 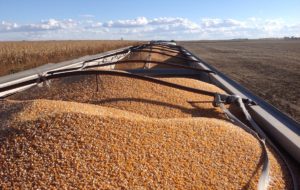