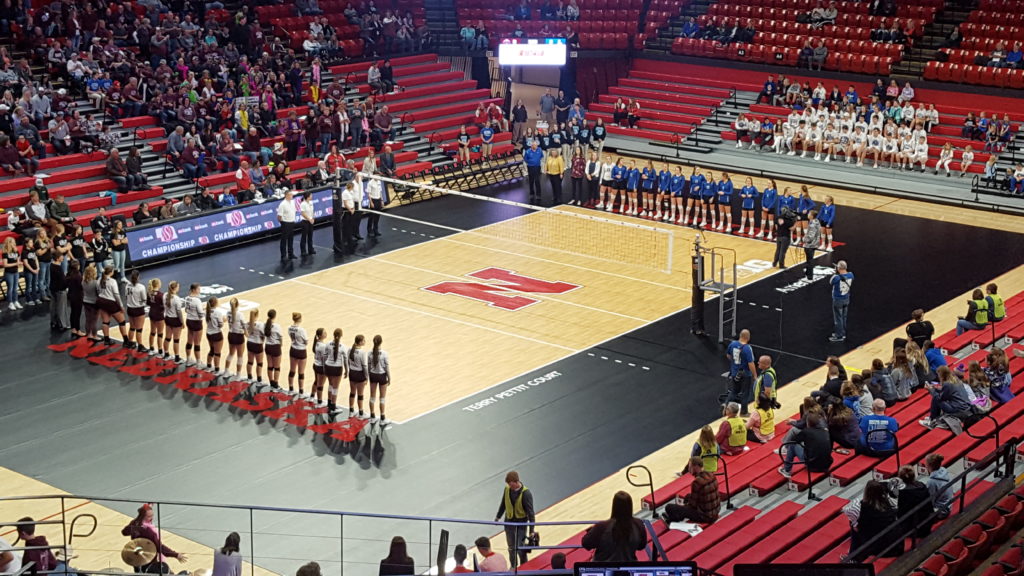 KTMX/KAWL Photo
LINCOLN- For the third day in a row, BDS had to go five sets, but they outlasted a gritty Humphrey St. Francis team Saturday morning at the Bob Devaney Sports Center in Lincoln, to claim their second consecutive Class D-2 state volleyball championship.
The Eagles took the first two sets (26-24, 25-16), but the Flyers heated up and claimed the next two (25-19, 25-18), setting up a winner take all fifth set.
Humphrey St. Francis came out strong in the final set, and jumped out to an 8-4 lead. Following a timeout, the Eagles got hot and went on a 10-1 run to go up 14-9. The Flyers countered with a 5-0 run of their own to tie it at 14. But BDS got the final two points, including a match-ending kill by senior Regan Alfs, and took the dramatic final set 16-14.
BDS won the title with a balanced attack. Junior Macy Kamler led the way with an impressive 30 kills and 19 digs. Alfs had 20 kills and 23 digs, and sophomore Mariah Sliva added 14 kills and 19 digs for the Eagles, who finish their championship season 30-4.
© 2020 Nebraska Rural Radio Association. All rights reserved. Republishing, rebroadcasting, rewriting, redistributing prohibited. Copyright Information
Share: