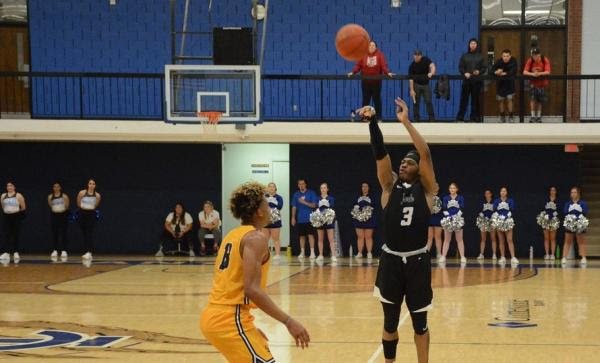 YORK – Tyreece Berry (JR/Muskogee, Okla.) became the Panthers’ newest hero on Saturday night as his three-pointer with 0.8 seconds remaining went through the net to propel York to victory 66-64. The Panthers were trailing by one point with 7.2 seconds with KWU at the free throw line. KWU missed the front end of the one-and-one and Lance Ewell (SR/Brock, Texas) picked up the rebound. He threw the ball over to Berry on the left side and Berry did the rest. As he rushed down the court he picked up a nice screen from DeAnte Barnes (SR/Rockford, Ill.) and threw up the 20-footer. The shot hit nothing but net and left less than a second on the clock for the Coyotes to throw up a prayer.

Berry was one of three Panthers to score in double figures. Michael Tolbert (SR/Apopka, Fla.), after missing two games, came back in where he left off and led the Panthers with 13 points. DeAnte Barnes finished with 11 points on 5-of-9 shooting. Kafani Williams (SR/Pembroke, N.H.) added nine points and six rebounds.

The game had 14 lead changes throughout and the score was tied eight different times. Both teams had similar numbers to keep the game close. The biggest difference came from beyond the arc and the Panthers converted on nine attempts, while the Coyotes converted on just three.

The Panthers improve to 9-4 on the season.