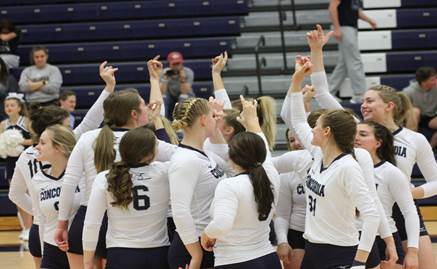 “Outside, the third set, we played a clean volleyball match tonight,” Boldt said. “Our offense was really balanced tonight, with four attackers in doubles figures. Kudos to our passers for keeping us in system throughout the night, and to Tara for distributing the ball evenly.”

The Bulldog attack was too much for the Doane defense tonight. The team hit for a .276 clip. Arleigh Costello put a down a team high 13 kills, hitting .400 on the night. The middle hitters, in Emmie Noyd and Kalee Wiltfong, each earned 11 kills with hitting percentages of .391 and .310, respectively. Camryn Oper and Kara Stark chipped in 10 and 9 kills.

Junior setter Tara Callahan racked up 49 assists while playing the role of maestro in the balanced attack. Concordia notched at least 12 kills in each set (58 total) and overpowered a Doane squad that was looking for a conference tournament semifinal appearance themselves.

“Defensively, we had 10 blocks and really made things happen at the net,” Boldt said. “Our serve was really effective tonight, we were able to get them out of system early in the match.”

The Tiger upset bid gained some traction in the third set when the likes of Madison VanHousen and Allison Kuenle started to put the ball away against the Bulldog defense. Their effort forced a fourth set where Doane  (17-13, 8-8 GPAC) kept things close in the early going, but the Bulldogs stayed poised and determined, and were able to put down 16 kills and hit .317 in the fourth set to put the match away.

The #3 seed Bulldogs will make a trip to Jamestown, N.D. to play in the GPAC Conference Tournament semifinal match vs. the #2 seed Jamestown Jimmies. The Jimmies (27-4 14-2) swept Morningside in the #2 vs. #7 quarterfinal match-up earlier today. Concordia and Jamestown met one other time this season, where the Bulldogs lost a heart-breaker in 5 sets inside Walz Arena.