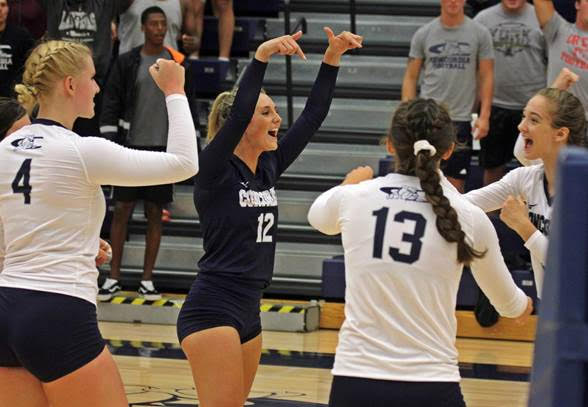 HASTINGS, Neb. – Wielding one of the nation’s most prolific attacks, the Concordia University volleyball team found the Hastings block too daunting to overcome on Wednesday (Oct. 2) night inside Lynn Farrell Arena. The Bulldogs hit just .079 while falling, 20-25, 19-25, 25-22, 25-16, to a Bronco team that was ranked 14th in the preseason.

Head coach Ben Boldt’s squad was unable to match its level from a week ago when it toppled both Doane and College of Saint Mary in straight sets. Concordia slipped to 15-3 overall (4-3 GPAC).

“Their block was giving us fits,” Boldt said. “It was disappointing that we couldn’t make the adjustments that we had to. Our connections on our offense were off tonight. Our timing was a little bit off. I’m not really sure what to attribute that to because our passing was good. We just have to get back in the gym and work on our connection.”

Over the opening two sets, the Bulldogs hit .000 and .088, respectively, while being out-blocked, 10-2. Hastings finished with a 14-6 block advantage. Emily Lenners and Claire Vanderbeek were both in on seven blocks. Things got only slightly better for Concordia as the evening wore on. It hit .244 in the third set. Any momentum had from that third set was quickly snuffed out. Boldt called two timeouts early in the fourth in an effort to try to stem the tide.

The Broncos (8-8, 3-3 GPAC) even managed to hold down Bulldog senior middle blocker Emmie Noyd, who was held to seven kills and a .154 hitting percentage. She entered the night ranked sixth nationally in hitting percentage. Kara Stark topped all players with 10 kills, but she also committed 13 errors.

It’s hard to succeed with less than your best on the road in the GPAC. Despite its modest record this season, Hastings poses a challenge as a program with a winning pedigree. The Broncos also sported national rankings of 11th in hitting percentage (.238) and 25th in blocks per game (2.22) at the start of Wednesday’s match.

The Bulldogs will take another shot at No. 8 Midland (13-5, 5-3 GPAC) in Fremont on Saturday. First serve from the Wikerts Event Center is set for 3 p.m. CT. In this season’s first matchup, Concordia fell in five sets to the Warriors inside Walz Arena on Sept. 14. Midland has won nine-straight meetings in the series.