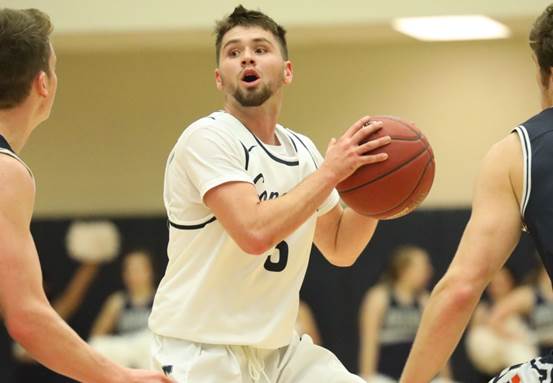 Ben Limback, who is at the outset of his seventh season at the helm of the program, has a roster chock-full of familiar faces. The Bulldogs certainly had the look of a squad familiar with one another in the rout.

“I was just pleased with the start to the game and the bench energy,” Limback said. “It was just good to see some guys do what we ask of them and have great energy. We were able to space the floor and our ball movement was good. The way they were guarding us they were playing us to shoot the three more. Our guys did a great job of shooting with confidence.”

Sloup was hot early and wound up burying six 3-point field goals in a contest that saw Concordia need less than eight-and-a-half minutes to build a double-digit lead. Nine different Bulldogs knocked in at least one trey in a stunning shooting performance. Concordia went 19-of-42 (.452) from downtown and led by as many as 38 points.

Limback got impressive results from the same starting five he employed for much of the second half of last season. It included Sloup along with sophomores Carter Kent and Justin Wiersema in the backcourt and seniors Tanner Shuck and Chuol Biel. None of them had to log heavy minutes due to the lopsided nature of the score. Sixteen players suited up and 13 of them found the scoring column for the Bulldogs, who shot 54.5 percent (36-for-66) overall.

In addition to Sloup netting six treys, newcomer Sam Scarpelli (3-for-6), junior Ryan Holt (3-for-4) and Kent (2-for-7) each drilled multiple attempts from long range. Sloup was the lone Bulldog to reach double figures, but he had plenty of help with Scarpelli and Holt contributing nine apiece. Shuck added seven and Biel had six.

Concordia also played some defense. It limited the Trojans to 5-for-17 shooting in the first half and built a 45-27 advantage at the break. The only thing that kept it from getting even more out of hand was Dakota State’s free throw shooting. It went 25-for-33 from the charity stripe. The Trojans (9-22 overall in 2018-19) were paced by 18 points from Josh McGreal.

“The takeaway we had is we have to limit our fouls,” Limback said. “We had too many hand checks. We have to clean that up, but I was pleased overall with our effort on the defensive end.”

Biel led the way in the rebounding department with 10 boards. He also blocked two shots and swiped two steals. The Bulldogs ruled the boards, 35-21. Sammy Adjei pitched in with five points and five boards off the bench.

The Hastings College Classic will continue on Saturday when the Bulldogs will take on Friends University (Kan.). Tipoff is set for 2 p.m. CT from Lynn Farrell Arena. The Falcons were in action Friday night against the host Broncos. Friends qualified for the 2019 NAIA Division II national tournament.