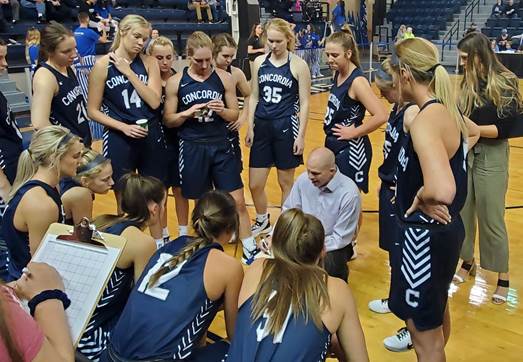 OMAHA, Neb. – This didn’t feel like an exhibition game. The defending national champion Concordia University women’s basketball team made its 2019-20 debut in a clash at NCAA Division I Creighton University on Tuesday (Oct. 22) night. This was about as classic of a game as you will find for one that won’t count in official records. The Bluejays outlasted the Bulldogs, 85-83, in a double overtime war of attrition inside Sokol Arena in Omaha.

Twelfth-year head coach Drew Olson took a roster nearly full of chip-on-the-shoulder Nebraska natives to a venue that had a strong Concordia turnout. There was no shame in the end result despite a burning desire to depart from Omaha with a win.

“It was a great atmosphere, great game for our players to experience,” Olson said. “I thought we played really well. We played really hard. Once we took the lead the feeling of the game shifted for both teams to, ‘okay, this is for real.’ They took us a little more seriously. It was a great battle throughout the game.”

After a slow start, the Bulldogs got humming with a big second quarter, took a 35-29 lead to halftime and built an advantage as large as 12 points in the third quarter. It seems fair to wonder if the outcome might have been different had leading returning scorer Taylor Cockerill not been forced to the sideline with Concordia up 48-37 at the 4:13 mark of the third quarter.

Even as the Bluejays, picked fourth in the Big East, made their push, the Bulldogs kept coming. Reigning national tournament MVP Grace Barry proved again that she can carry a team offensively. Barry led all players with 26 points while dishing out eight assists. Barry drained the trey in the first overtime that knotted the score and paved the way for a second extra period.

Concordia actually survived potential buzzer beaters at the end of regulation and at the close of the first overtime. Some shots did finally start falling for a Creighton squad that was held to 29.1 percent shooting for the game. Olivia Elger poured in 21 points while Jaylyn Agnew recorded 17 points and 19 rebounds.

Elger and Agnew helped the Bluejays survive the ultimate scare. Creighton’s length was a problem for the Bulldogs, but the Bluejays were flustered by Concordia’s constant zone pressure and up-tempo pace. Olson continued to bark for his team to “run, run, run” in double overtime. The Bulldogs still had gas in the tank even after Colby Duvel, Mackenzie Koepke and Philly Lammers fouled out.

What was so striking on Tuesday was just how obvious it was that Barry belonged on the floor with NCAA Division I counterparts. She may have to take on an even bigger scoring role with Cockerill’s status in question. Olson knows his team can adjust.

“She’s always had that capability, but I think her adding to her game with her 3-point shot has really helped her,” Olson said of Barry. “It makes her so much harder to guard. We just know we’re a better team when she’s looking to score.”

The 2019-20 season will get started for real on Friday at the College of the Ozarks Classic in Point Lookout, Mo. On the first of the two-day event, the Bulldogs will take on Sterling College, a 2019 NAIA Division II national qualifier. Tipoff is set for 5:30 p.m. CT.