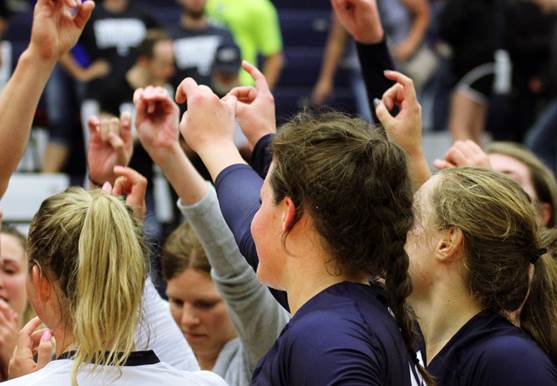 FREMONT, Neb. – Wins over perennial GPAC power Midland have been difficult to come by for the Concordia University volleyball program, but the 2019 squad is proving to be one to be reckoned with. Instead of sulking after Wednesday’s rough performance at Hastings, the Bulldogs sharpened their game and defeated the eighth-ranked Warriors, 25-21, 25-23, 13-25, 25-17, in Fremont, Neb., on Saturday (Oct. 5) afternoon. There were a combined 28 blocks in the contest.

Head coach Ben Boldt’s squad effectively finished a job the 2018 squad came up agonizingly short of accomplishing in winning at the Wikert Event Center. Concordia is now 16-3 overall and 5-3 in the GPAC.

The Bulldogs had fallen in nine-straight meetings with Midland (13-6, 5-3 GPAC). This was another step forward in reaching the heights Concordia aspires to attain, but Boldt was not ready to think big picture just yet. The Bulldogs were consumed by doing what it took to get it done in this particular match, on this particular day. Part of the formula involved outhitting the Warriors, .123 to .108.

Three days after an off-match, Concordia tightened up on the attack and returned to effective balance led by setter Tara Callahan, who filled the stat sheet with 28 assists, 10 blocks, six digs and four kills. The kills were spread out with 10 by Emmie Noyd, nine by Kalee Wiltfong, seven by Kara Stark and six by Camryn Opfer.

This time when the Bulldogs had a chance to put Midland away, they did it. That’s an important hurdle. Leading 18-16 in the fourth set, Concordia rattled off six points in a row, with kills by Noyd bookending that stretch. A service error put it on ice. The 2015 Bulldog squad that qualified for the national tournament was the program’s most recent edition to close the deal in Fremont.

“We believe in ourselves,” Boldt said. “I think our team just wants to show up and play their best every time they go out. It’s great to get another one and we’re looking forward to getting back on the floor again.”

Boldt also went on to laud a back row captained by junior Marissa Hoerman (seven digs). Erin Johnson led the way with 15 digs, in addition to her four aces. Kaylie Dengel chipped in with 10 digs and Noyd added nine blocks to her total. Additionally, Boldt referred to Callahan as a “foundation for how we play defense.”

Head coach Paul Giesselmann’s squad also fell in five sets at Doane on Wednesday. The Warriors (2018 national semifinalist) were led on Saturday by the 12 kills from Shelby Bretschneider. Their .108 hitting percentage was well below their season average of .214.

The Bulldogs will be back at home at 7:30 p.m. CT on Wednesday to host Doane (12-8, 3-4 GPAC), which just handed Midland a five-set loss this past Wednesday. In this season’s first meeting in Crete, Concordia toppled the Tigers in straight sets. The two sides split their two 2018 matchups.