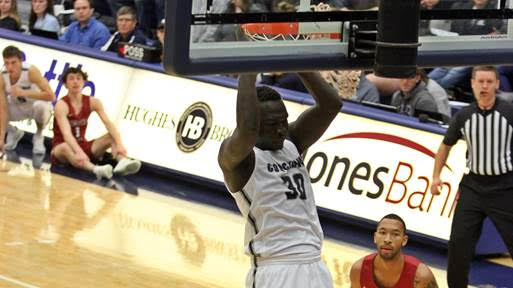 SEWARD, Neb. – The Concordia University men’s basketball program continues to have Hastings’ number. It wasn’t easy, but the Bulldogs have snapped a three-game skid while knocking down 14 treys in an 83-77 home victory over the Broncos on Wednesday (Feb. 12). Concordia won despite another strong outing from Hastings standout Bart Hiscock (22 points and 10 rebounds).

The win keeps hope alive of a potential top-four finish and a home game in the GPAC quarterfinals. At the very least, head coach Ben Limback’s squad has guaranteed a spot in the eight-team conference tournament and is now 18-9 overall and 9-8 within league play.

“I felt like they outplayed us in the first half, especially on the glass,” Limback said. “We got up about 10 and they came back with some hustle plays. We really challenged our guys at half to play harder. They shot over 50 percent in the first half. I think we did a much better job pressuring them and contesting things in the second half.”

This one essentially went wire-to-wire. Two offensive rebounds down the stretch made a difference in the outcome. Both plays led to 3-point field goals – one by Brevin Sloup and another by Carter Kent. Suddenly, a tie ballgame turned into a 79-73 Bulldog lead in the final minute. Four Sloup free throws in the closing 15 seconds put the game away and gave Concordia its eighth-straight series win over the Broncos (13-14, 6-11 GPAC).

Walz Arena seemed to be the right tonic for the Bulldogs, who had lost three-consecutive games on the road to begin the month of February. Sloup poured in a game high 25 points on the strength of 5-for-8 shooting from long range. All five starters reached double figures as Justin Wiersema (16), Chuol Biel (12), Tanner Shuck (10) and Kent (10) supplied additional firepower.

“It definitely starts at practice,” Wiersema said of his team’s ability to put the previous three games behind it. “We come to every practice ready to go and we play hard. I think it really translates into games.”

The offensive role for Wiersema continues to take off. He’s now notched at least 15 points in four of the past six games. Biel also deserves plenty of praise for his work. He grabbed 12 rebounds and swatted three shots in a double-double outing. Off the bench, Gage Smith contributed seven points and five rebounds.

An improved defensive performance in the second half and the clutch play of Sloup pulled Concordia out of a recent slump. Meanwhile, Hastings has dropped four in a row. Four of the five Bronco starters reached double figures. Marcus Hiemstra put up 13 points and six rebounds to go along with another strong night from Hiscock.

Now, can Concordia build off of this and play with consistency down the stretch? “We have to continue to be sharp offensively and sustain runs better. I think Saturday is going to be fun for a lot of reasons. It’s senior day and a revenge game. We’re just trying to play hard and see how well we can finish.”

The regular-season home slate comes to an end on Saturday when the Bulldogs will host No. 18 Mount Marty (19-8, 10-7 GPAC) for a 4 p.m. CT tipoff in Seward. Concordia will try to avenge the 97-70 loss suffered in Yankton, S.D., on Dec. 14. Limback’s program will also use the day to honor six seniors. That ceremony will take place just prior to tipoff.