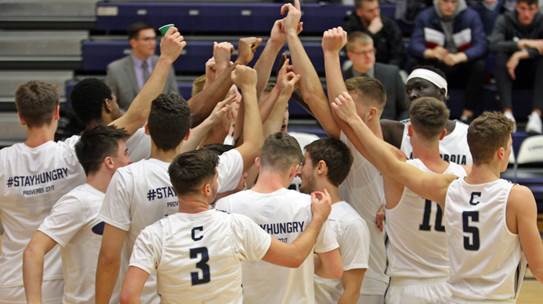 SEWARD, Neb. – There was a lot riding on the outcome of Wednesday (Feb. 26) night’s GPAC quarterfinal matchup, but the Concordia University men’s basketball team played cool under pressure while hosting in the postseason for the first time since 2011. Budding sophomore Justin Wiersema helped spark another second half rally as the Bulldogs turned away Northwestern, 74-63, inside Walz Arena. Concordia allowed the visitors a grand total of two 3-point field goals on the evening.

Of course head coach Ben Limback’s squad wants to keep this thing going as long as possible, but it had to have this one – or the season likely would have been over. The Bulldogs will advance to the GPAC semifinals with an overall record of 22-9.

“This team just keeps fighting and it was a gutsy performance again,” Limback said. “I’m really proud of our defense. We struggled a little offensively. They did a great job of protecting the paint. I feel like there were so many big moments in the last six or seven minutes. I thought the grittiest player tonight was Chuol Biel. We didn’t even know if he would play. He had a huge, huge defensive game. So did Justin Wiersema.”

Biel’s presence seemed to provide a boost for a Concordia team that had mostly been winning shootouts during the four-game win streak it carried into the evening. One of the most prolific perimeter shooting teams in the nation, the Red Raiders (20-11) went 2-for-17 from long range and got to the free throw line for only seven attempts. Craig Sterk (24 points on 11-for-20 shooting) tried to keep Northwestern afloat.

It just couldn’t stop a second-half surge that has been a theme for the Bulldogs. Wiersema led the charge with 22 points and aided in digging Concordia out from a 45-33 deficit with less than 16 minutes to play. The rest of the way, the Bulldogs outscored the Red Raiders, 41-18, in a very one-sided closing stretch.

“We never lose hope,” Wiersema said. “Even if we’re down by 20 we’ll still keep playing hard. We made some key defensive stops and really got the ball moving and knocked down some threes. The next thing you know we’re tied. Then we’re rolling.”

That roll featured help from some of the usual suspects – Brevin Sloup (16), Carter Kent (15) and Tanner Shuck (14) all reached double figures in scoring along with Wiersema. A late 12-2 run turned a 58-55 lead into a 70-57 advantage. Kent capped it with a dagger of a corner trey and Shuck added four points during the game-winning push.

Biel came off the bench to grab nine rebounds and a pair of steals. His work down low is a key factor in cleaning up the paint. Concordia also did a number on Northwestern leading scorer Trent Hilbrands, who went 3-for-14 from the floor. As a team, the Red Raiders shot 41.2 percent (28-for-68) and went especially cold in crunch time.

“Justin and Tanner did a great job on their leading scorer,” Limback said. “We had to get it going from the 3-point line because we couldn’t do much inside – and defending that three was huge tonight. Again, just a gutsy performance.”

The Bulldogs received votes in the NAIA Division II poll released early in the day and are squarely on the bubble when it comes to the national tournament picture. For now, Concordia can enjoy the program’s first postseason victory since 2009.

Thanks to eighth-seeded Hastings’ upset of top-seeded Morningside, the Bulldogs will have the luxury of being at home on Saturday for the GPAC semifinals. The Broncos (16-15) will be on hand for a 4 p.m. CT tipoff. Concordia won both regular-season meetings with Hastings. Said Wiersema, “We definitely know what’s at stake … one game at a time. Win after win. That’s all we need to do.”