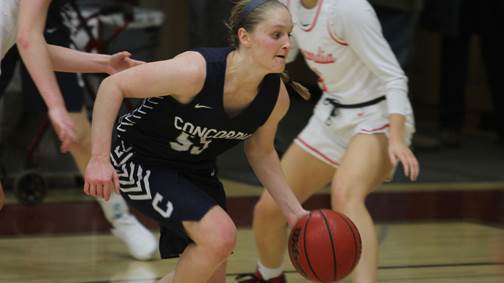 MITCHELL, S.D. – This win was more about grit than it was about playing beautiful basketball. In the end, the scoreboard at the Corn Palace pleased the eyes of the visitors, who appeared to be in serious trouble in the waning moments. However, senior point guard Grace Barry clutched up and the third-ranked Concordia University women’s basketball team gutted out a 69-67 victory at No. 12 Dakota Wesleyan on Saturday (Feb. 1).

These are the types of games championship programs find ways to win. Fourteenth-year head coach Drew Olson’s program has now won nine of the past 10 meetings with the rival Tigers and has moved to 22-2 overall (15-1 GPAC).

“It just shows that we have the heart of a champion,” Olson said. “It also shows that we have really good depth. Even if key players go down, we have others who can step up and do some really nice things … In the fourth quarter we found a way. We turned it around and showed a lot of toughness.”

It’s going to be a struggle when the shooting percentage hovers in the low 30s on the road. The Bulldogs trailed 54-45 early in the fourth quarter and still found themselves down four in the final few minutes on Saturday. Of course Barry didn’t do it alone, but she posted Concordia’s final nine points of the contest, including two on pressure cooker free throws with 2.2 seconds left on the clock. Those foul shots broke a 67-67 tie. Dakota Wesleyan failed to get a shot off on the game’s final possession.

MacKenzie Helman also played a critical role in the outcome. She came off the bench to play 21 minutes that saw her total 12 points, five assists and three steals. She buried two 3-point shots during the fourth-quarter rally and later emerged with the theft that set up Barry’s game-winning free throws. Helman led the special forces off the bench that helped alleviate some concerns caused by injuries.

The turnovers negated the shooting advantage (43.4 percent to 33.3 percent) that the Tigers enjoyed on their home court. Dakota Wesleyan frittered the ball away 32 times (eight by star Kynedi Cheeseman). The Tigers fell despite a big day in the paint from Jessica Mieras, who notched 21 points and seven rebounds. Cheeseman poured in 18 points and Kaylee Kirk added 12. Sarah Carr was held to seven points on 2-for-11 shooting.

Barry went 6-for-19 from the field, but she did big things with the game on the line. Said Olson, “She wasn’t at her best but when really needed her to be, she was amazing. She came up with some big plays down the stretch. We kind of stole one today.”

Before fouling out late in the game, Philly Lammers notched 16 points, six steals and four rebounds. The trio of Barry, Helman and Lammers combined for 46 points. Colby Duvel contributed six points and eight rebounds. Off the bench, Claire Cornell chipped in six points and Rylee Pauli swiped three steals. After being hit in the face a few days earlier, Riley Sibbel played with a mask on, but she was limited to 14 minutes.

Olson had plenty of praise for Helman’s performance in saying, “Mack Helman continues to step up in big ways. I’m so proud of what she’s become this season.”

A stretch of three-straight GPAC road games will continue on Wednesday when the Bulldogs visit Doane (2-19, 1-15 GPAC) for a 6 p.m. CT tipoff inside the Haddix Center. In this season’s first meeting, Concordia trounced the Tigers, 110-47, on Dec. 4. The Bulldogs have won seven-straight matchups in the series.