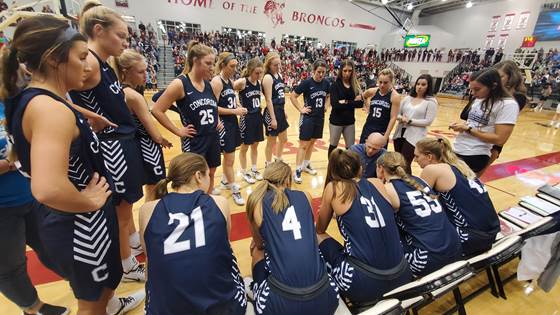 HASTINGS, Neb. – Hastings looked like the more focused team for much of Wednesday (Jan. 8) evening. A veteran Bronco bunch showcased too much grit defensively while keeping the top-ranked Concordia University women’s basketball team in check. The Bulldogs shot just 36.7 percent from the floor while falling, 66-59, inside Lynn Farrell Arena.

This contest had plenty of meaning as far as regular-season games go. Fourth-ranked Hastings (18-0, 10-0 GPAC) remains unbeaten on the season while Concordia (14-2, 9-1 GPAC) has been tagged with its first conference blemish. Undeniably, this was a great atmosphere for college basketball.

“It was a great crowd. It was great to see so many high school teams come out and support,” Olson said. “It was really good for college women’s basketball and a great experience for our players to play in. We’ll play in a few more of those throughout the year. I thought defensively they were really, really good. They caused us a lot of problems and didn’t allow us to do what we normally do in our offense. They exposed some things that we have to get better at.”

The Broncos are tough as nails on the defensive end. Led by star point guard Shandra Farmer, Hastings presents a starting lineup that features four seniors and one junior. In other words, Coach Jina Douglas’ bunch is unafraid of a GPAC showdown. At times it suffocated the life out of the Bulldogs, who committed 25 turnovers. Uncharacteristically, Concordia was a rough 10-for-23 from the foul line, compounding its issues. It also went the final six minutes of the first half without scoring a single point.

As one would expect, the Bulldogs never gave in. Point guard Grace Barry willed her team back into it by scoring eight points during a fourth quarter that began with Concordia trailing, 56-43. Methodically, Concordia whittled its deficit all the way down to five (62-57) when Barry stole the ball in the backcourt and scored on a layup with just under two-and-a-half minutes remaining. Down the stretch, the Broncos did what they do best, defend.

Farmer and her side took better care of the ball (17 turnovers) than most Bulldog foes and did just enough offensively. Gabby Grasso (15), Sophia Pankratz (14) and Kaitlyn Schmit (12) each reached double figures in scoring while Farmer finished with nine points. Hastings shot 44.4 percent (24-for-54) from the floor.

Barry finished with a game high 17 points and six steals. Philly Lammers was held to 5-for-15 from the floor, but she posted a double-double with 11 points and 10 rebounds. Colby Duvel added eight points and eight rebounds and MacKenzie Helman contributed six points off the bench.

This game marked the first time Concordia and Hastings had matched up when both teams owned a top five national ranking since 2003. The Broncos managed to end an eight-game series losing streak. At 18-0, Hastings has broken a program record for most consecutive wins to begin a season. The two sides will meet again inside Walz Arena on Feb. 12.

The Bulldogs will be back at home to host Jamestown (10-6, 4-5 GPAC) at 2 p.m. CT on Saturday. The Jimmies are under the direction of Thad Sankey, a Concordia alum now in his second season as head coach. The Bulldogs won last season’s meetings by scores of 87-59 in Seward and 98-67 in Jamestown.