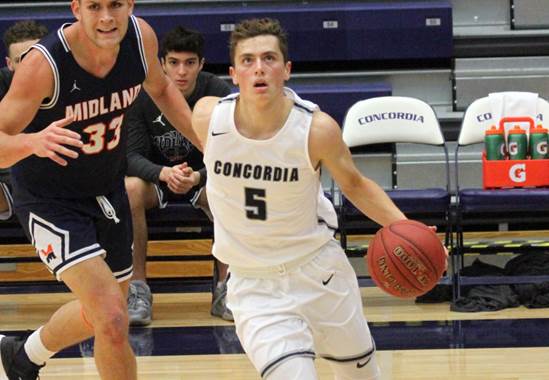 SEWARD, Neb. – It got a little harrier than the Concordia University men’s basketball team would have liked, but it found a way to hold off Doane in Wednesday night (Dec. 4)’s GPAC clash inside Walz Arena. The Bulldogs let an 18-point second half lead melt away before recovering to pull an 83-77 double overtime victory out of the fire. It was Concordia’s first outing since a 70-58 win over Nebraska Christian College on Nov. 23.

The Bulldogs seemingly had control of the game until the Tigers (4-9, 0-4 GPAC) chipped away from their disadvantage over the final nine minutes of regulation. Doane closed regulation with a 26-8 run. Isiah Sykes necessitated overtime by draining a 3-point shot with under 10 seconds remaining. Concordia missed an opportunity with one last crack at a bucket just before the buzzer.

Already facing adversity without point guard Brevin Sloup, the Bulldogs showed some resilience in the first overtime. A trey by Sam Scarpelli and a bucket by Justin Wiersema erased what had been a five-point deficit (71-66). Both baskets came after offensive rebounds. Chuol Biel then helped seal the win in double overtime by a bucket inside and then a pair of free throws in the last minute. Biel also grabbed two defensive boards in the waning moments.

Limback leaned heavily upon his starters, each of which played at least 33 minutes. Carter Kent paced Concordia with 22 points on 7-for-13 shooting from the floor. All five starters scored in double figures, including Wiersema (16), Biel (13), Scarpelli (12 points and seven assists) and Tanner Shuck (10). Biel (three blocks) and Shuck (three blocks) both recorded double-doubles.

Neither team shot particularly well with the Bulldogs putting up a 39.2 percent clip from the floor and Doane posting a shooting percentage of 37.7. Anthony Laravie knocked home a game high 24 points (in addition to 12 rebounds) and helped spur the Tiger comeback. Doane remains winless in conference play.

The Bulldogs will continue their week at home by hosting sixth-ranked Dakota Wesleyan (8-1, 4-1 GPAC) at 4 p.m. CT on Saturday. Concordia will attempt to snap a three-game series skid against the Tigers, a program that has reached the national tournament in each of the past five seasons.