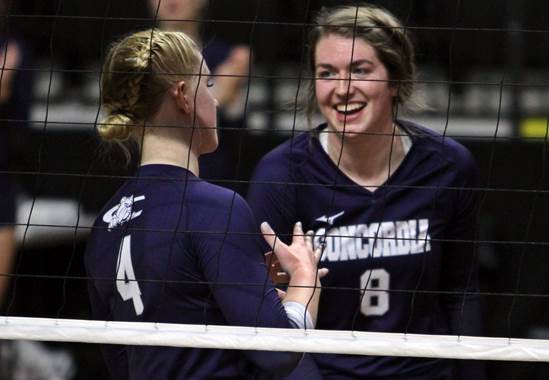 SIOUX CITY, Iowa – A rookie to the final site of the national tournament stage, the 15th-ranked Concordia University volleyball team has motored past its first two opponents of pool play at the NAIA Volleyball National Championship. Senior Emmie Noyd dismantled the University of Saint Mary (Kan.) by going off for 21 kills on Wednesday (Dec. 4) as the Bulldogs won, 25-15, 25-18, 25-18, at the Tyson Events Center in Sioux City, Iowa.

Second-year head coach Ben Boldt had his team prepared to seize the moment. Concordia (25-6), which also topped No. 19 Montana Tech on Tuesday night, has not quite clinched a spot in Friday’s bracket play, but it’s moving in that direction. It has put itself on the cusp of such achievement with impressive focus.

Noyd has put on a display in Sioux City. She backed up 16 kills on Tuesday with another big performance on Wednesday that included four blocks. It became clear early that Concordia’s height and power at the net would be too much. The Bulldogs blocked six Spire attacks in the opening set that laid the groundwork for a snappy late evening victory. Also in the middle, freshman Kalee Wiltfong went for 13 kills on 26 swings.

Junior Tara Callahan has developed quite a feel for where the ball needs to go to make Concordia’s attack sizzle. The Bulldogs outhit Saint Mary, .381 to .152.

“I think we have a few things to work on in cleaning up our game and staying focused a little better,” Callahan said. “But tonight our middles really flowed and our blocking was amazing in the first set. We have things to clean up, but our foundation is pretty strong.”

The middles were fed early and often so there were not quite as many chances on the pins, but GPAC Freshman of the Year Camryn Opfer managed to put down eight kills on 19 attempts. Callahan racked up 45 assists in another stellar outing. Opfer and Marissa Hoerman shared the team lead with 13 digs apiece. Noyd and Opfer were the ringleaders in a blocking effort that outnumbered the Spires, 8-3.

“We executed really well, which was awesome to see, especially at this point in the season” Boldt said. “We had 34 kills out of our middles. When you can do that it means you’re passing the ball and digging the ball really well, taking care of first contact. Those are the things we talk about. The good play from the middles was kind of icing on the cake.”

Saint Mary (30-12) competed early in the second and third sets, but did not have the firepower to take a set from Concordia (55-26 kill advantage). Anna Hester topped the Spires with seven kills. Saint Mary, a member of the Kansas Collegiate Athletic Conference, is making its first-ever appearance at the national tournament. The Spires fell in straight sets to Indiana Wesleyan on Tuesday and are 0-2 in pool play.