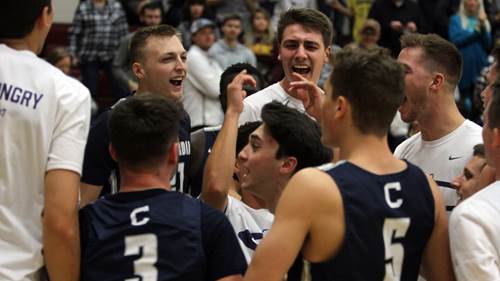 RIVER FOREST, Ill. – After two years of falling short of the Concordia Invitational Tournament title game, the Bulldogs weren’t going to allow that to happen in 2020. The Concordia University, Nebraska men’s basketball team clicked on both ends of the floor during a dominant first 20 minutes and rolled to a 79-57 victory inside Geiseman Gymnasium in River Forest, Ill. Six different Bulldogs curled in at least one trey.

Head coach Ben Limback is hoping to lead a team to a CIT championship for the sixth time (including two as leader of CUAA). CUNE has won eight of its last nine games to move to 15-6 overall.

It wasn’t just one guy on this particular afternoon. Sam Scarpelli brought the fire again by dropping in three treys and a game high 15 points. Off the bench, Klay Uher provided a nice spark with seven points on 3-for-4 shooting from the floor. Uher was one of seven Bulldogs to contribute seven points or more. Tanner Shuck also found his way into double figures with all 13 of his points coming in the first half. Chuol Biel added six points while hauling in a team best eight rebounds.

CUNE enjoyed its first double-digit lead of the game at the 13:18 mark of the first half when Scarpelli canned a triple. It only got worse for the Cardinals, who watched as Uher muscled in two points and sank the ensuing free throw for a 41-20 advantage. Just before the halftime buzzer, AJ Watson crushed CUAA’s spirit with a long 3-point bank shot. The game had essentially been decided at that point with the score sitting at 50-24.

Scarpelli has been pushing for additional minutes as he continues his surge. He also netted 21 points on Wednesday versus top-ranked Morningside. This was his first taste of CIT.

“It’s huge. It’s a big deal to us (to win CIT),” Scarpelli said. “It’s bragging rights between the Concordias. We put a lot of stress on winning, night-in and night-out. We want to come out and play hard and play for each other. It’s huge to try to win for each other.”

The Cardinals (6-15) shot only 34.5 percent from the floor. Their starting five went a combined 12-for-38 from the field. CUAA compounded its issues with 19 turnovers. Jerald Booker topped the squad with 12 points.

While the Bulldogs cooled off in the second half, they looked like a team on a mission. Two years in a row of consolation games did not sit well for a program that has had its way more often than not at CIT.

“That’s what we talk about – bring the trophy home,” Limback said. “That’s everybody’s mentality here. Right now our guys are locked into that goal. It was a preseason goal. These guys wanted to win CIT. The first half especially really showed that focus and desire.”

The quest for a 28th CIT in program history will continue on Saturday when the championship clash tips off at 7:45 p.m. CT from Concordia-Chicago. The Bulldogs are looking for their third CIT title in the past five years and their third in a row in River Forest.