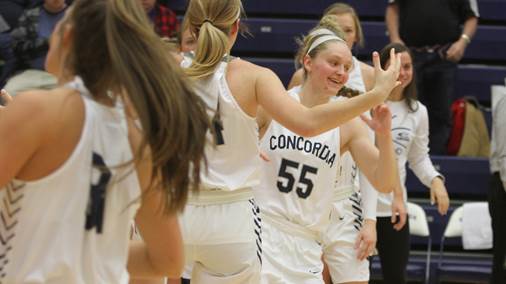 SEWARD, Neb. – The Bulldogs were bloodied early – literally – but they shook off the upset bid of Sammy Blum and visiting Northwestern while continuing their winning ways. The third-ranked Concordia University women’s basketball team absorbed 14 Red Raider 3-point field goals and pulled away late for a 91-76 victory inside Walz Arena on Wednesday (Jan. 29) night.

Fourteenth-year head coach Drew Olson’s squad effectively transitioned back into GPAC play after capturing the Concordia Invitational Tournament title this past weekend. The Bulldogs have moved to 21-2 overall and to 14-1 inside the conference.

Assistant coach Tae’lor Purdy-Korrell joined the postgame on 104.9 Max Country. Said Purdy-Korrell, “It was kind of a weird first half with injuries to a couple of our players. We had a little bit of a slow start. I do think we did some good things offensively. Defensively we were a little slow to start but we managed to make some adjustments at half.”

The final score is a bit deceiving. No. 17 Northwestern (12-8, 7-8 GPAC) hung tight for nearly all of the first three quarters. Finally, Concordia distanced itself from the Red Raiders by getting hot from long range. Taryn Schuette, Delani Fahey and Mackenzie Koepke each nailed a trey during a stretch that saw the Bulldogs turn a three-point lead into an 11-point advantage late in the third period.

The lead grew as large as 18 points (91-73) in the latter stages of the fourth quarter. MacKenzie Helman did the honors of providing the daggers. She fluttered home three treys in the final 3:13 of game time to snuff out any idea of an upset. Helman equaled Grace Barry for a team high with 17 points, leading an attack that produced five double-figure scorers.

Barry also dished out nine assists and swiped five steals. The other double-figure scorers were Colby Duvel (13), Schuette (12) and Koepke (11). Koepke grabbed nine rebounds and Schuette snagged five rebounds. Offensively, Concordia was on its game after the first quarter. It ended up shooting 50.7 percent (34-for-67) from the floor and 45.8 percent (11-for-24) from 3-point range. It outnumbered Northwestern in bench points, 54-7.

“I thought they did a great job,” Purdy-Korell said of Barry and Helman. “Especially MacKenzie coming in and filling the void for Riley (Sibbel) for a while. Mack has been playing really well lately and her shot has been falling. With Grace, any given night she is un-guardable. I thought she did a really good job getting to the hoop and creating for her teammates.”

Blum was the ringleader in allowing the Red Raiders to hang tight. She was a scalding 7-for-8 from beyond the arc while racking up a game high 25 points. Devyn Kemble also chipped in with 17 points. Northwestern turned the ball over only three times in the opening quarter but finished with 24 turnovers, compared to 15 by the Bulldogs. The Red Raiders have scuffled a bit in the month of January, going 2-6 since the calendar flipped to 2020.

Chalk up the ninth win over a ranked opponent this season for Concordia, which has won 10 of the past 11 meetings with Northwestern. The Bulldogs also defeated the Red Raiders in Orange City, Iowa, on Jan. 2, 97-81. Even a Riley Sibbel bloodied nose early in the game failed to slow down Concordia.

A trip to the Corn Palace will be up next. The Bulldogs will be in Mitchell, S.D., on Saturday for a 2 p.m. CT tipoff at No. 12 Dakota Wesleyan (16-7, 9-6 GPAC). In the first meeting this season between the two sides, Concordia rallied from a big early deficit to win going away, 100-72, inside Walz.