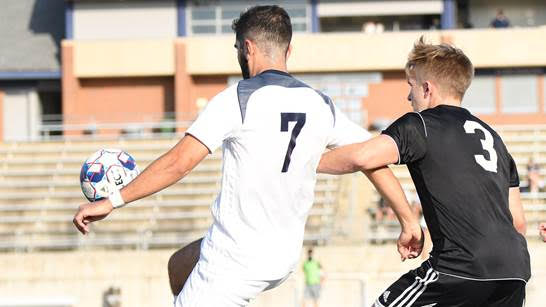 YANKTON, S.D. – There was no time to celebrate Saturday’s home win over Jamestown. The Concordia University Men’s Soccer team quickly returned to GPAC play with a Monday (Oct. 12) matinee at Mount Marty. All goals were scored during a wild second half of action at Crane Youngworth Field in Yankton, S.D. The Bulldogs ultimately settled for a 2-2 draw after two overtime sessions.

The tie interrupted a six-game win streak for Head Coach Jason Weides’ squad. The Bulldogs (6-1-1, 4-0-1 GPAC) are unbeaten over their last seven outings.

“Our guys worked hard. It wasn’t for a lack of focus our effort (that it ended in a tie),” Weides said. “We had some lapses in important moments and that ultimately made the difference in the game. We created enough chances to win the game, but for whatever reason we lacked that composure or that quality to finish off the game. To be fair, their keeper came up with some great saves. We had a few opportunities to put the game to bed when we were ahead 2-1 – just weren’t able to convert it.”

It was easy for Weides to think about the opportunities that were missed in a game that saw Concordia hold a shot advantage of 22-8. There were a number of near misses that found the post or the crossbar instead of the back of the net. In the second half, the Bulldogs found themselves in danger of a loss when they went down 1-0.

Concordia responded with an equalizer from Matt Schultz, who recorded his first career goal in the 70th minute. About four-and-a-half minutes later, Yessine Bessaies put away his second goal (via penalty kick) of the season to provide a 2-1 advantage. Israel Jimenez necessitated the overtime periods by slotting the ball into the back of the net in the 88th minute.

In the 20 minutes of overtime play, the Bulldogs outshot the Lancers, 6-1. Concordia had one corner kick opportunity that came in the second overtime period. Mount Marty effectively (1-3-1, 0-3-1 GPAC) effectively milked the clock over the final 10 minutes.

Said Weides, “It was just one of those days. I thought Mount Marty played quite well overall. They made it tough on us and they worked hard. I didn’t think we played bad defensively, but we were poor in those two moments. We’ll get better from it. Every tie either feels like a win or a loss and this tie feels like a loss.”

The Bulldogs will have time for rest prior to hosting 2019 NAIA national runner up Hastings (4-0, 4-0 GPAC) at 3:30 p.m. CT on Saturday. The two programs met in the GPAC tournament title game three-straight years from 2015 through 2017. The Broncos last played on Sept. 26 (7-0 win over Presentation).