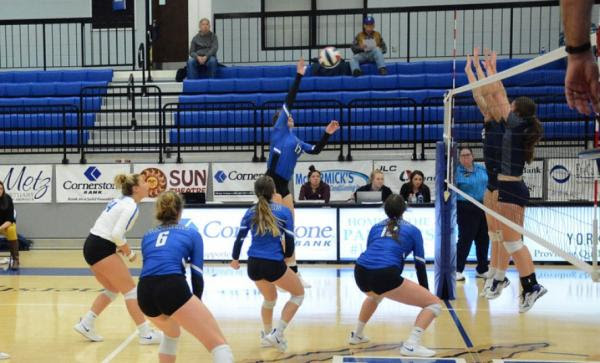 YORK – York College was looking for their first win against McPherson College since joining the KCAC but was swept on senior day 25-22, 25-20, 25-21.

Molly Bich (SR/Billings, Mont) led the Panthers with nine kills in her last appearance in the Freeman Center. Kayli Riesgo (SR/Tuscon, Ariz) was also making her last appearance and led the team with 32 assists, while adding 12 digs. Three other Panthers were in double figures defensively with Naomi Warren (JR/Fort Worth, Texas) leading the way with 25 digs. Kaylin Miller (FR/Lincoln, Neb) added 17, while Jasmine Scarbrough (FR/Arlington, Texas) had 12.

The Panthers started the day out strong jumping ahead in game one to a 7-1 lead. A timeout allowed the Bulldogs to climb back in it as they made a few runs to close the gap before taking the tying the game at 17. At that point the Bulldogs were hitting on all cylinders as they went up 20-17 and finished it out 25-22.

Game two had the Bulldogs jump out early with a 10-3 lead. York climbed back to 18-15, but couldn’t get any closer as the Bulldogs stretched it back out to take the game 25-20.

York closes out the regular season on Wednesday night as they travel to Tabor for a 6:00 p.m. matchup. The Panthers have qualified for the KCAC tournament but will have to wait until Saturday to find out their seeding and matchup.