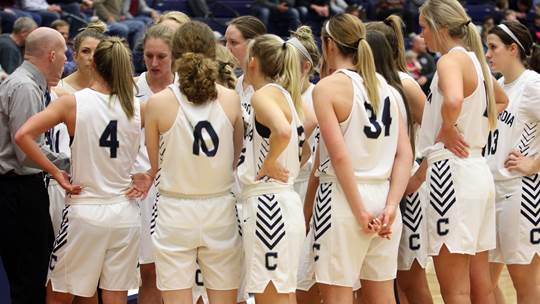 SEWARD, Neb. – Visiting Morningside lost the turnover margin in a big way – and it cost it. The third-ranked Concordia University women’s basketball team went wire-to-wire with the press in getting the Mustangs out of their game. The defensive tenacity of the Bulldogs carried them to an 85-61 win as a three-games-in-four-days stretch began Wednesday (Jan. 22) in victorious fashion.

“I thought our kids did a great job defensively being focused on what we wanted to do,” Olson said. “The pressure did get to them at times. I just thought it got the pace going the way we wanted it.”

This wasn’t quite a thing of beauty at all times, but the end result was the perfect way to start CIT week. Both teams barely shot above 40 percent and Morningside made only one of its first 16 tries from 3-point range. The Bulldogs continue to give themselves margin for error with a press that proved it can even provide fits for a veteran squad like the one accomplished head coach Jamie Sale puts on the court.

The contrast from the 3-point arc was another huge difference maker. The Bulldogs made it a runaway with their marksmanship in the final quarter. Taylor Farrell, MacKenzie Helman, Taryn Schuette and Riley Sibbel all hit at least one triple in the final stanza and Lammers added an exclamation mark with a fancy layup in transition. After missing nearly all of last week, Lammers returned to the court on Wednesday and totaled 13 points, five rebounds, five steals and four assists.

“She’s just such a huge, important part of our team,” Olson said. “We found ways to win without her, but obviously we’re a lot better with her. I’m really proud of her. She was courageous and tough and really had a huge impact on this game.”

Farrell wound up leading Concordia with 14 points while making four treys. Koepke added 13 points and seven rebounds, Grace Barry filled the stat sheet with eight points, eight assists and five steals and Colby Duvel notched nine points and nine rebounds. It added up to a win despite 32.4 percent shooting in the first half. The Bulldogs made up for it by going 14-for-26 (.538) from 3-point range.

Morningside had won six in a row – all by double digits. Sydney Hupp did her part by putting up 23 points and eight rebounds. The Mustangs are actually the only program to win at Walz Arena since the start of the 2016-17 season. Concordia has won 61 of its last 62 home games.

Next up is the Concordia Invitational Tournament, which dates back to 1973 on the women’s side. The Bulldogs will be in search of their 30th CIT title all-time and seventh in a row. CUNE will get CIT started in River Forest, Ill., on Friday by taking on Concordia-Ann Arbor (12-7) at 1 p.m. CT. Lammers is the reigning CIT MVP.