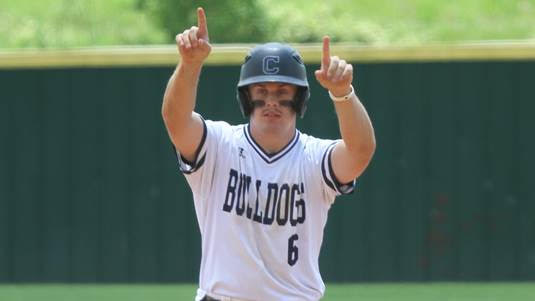 McPHERSON, Kan. – The 2020 Concordia University baseball season is officially underway. It got started on Saturday (Feb. 8) with what was scheduled for a doubleheader at Bulldog Park, home of McPherson College (Kan.). Behind a strong outing from Jason Munsch, Concordia took game one, 4-2. It then trailed, 14-11, after six innings of game two, which was suspended due to darkness. That contest will be resumed on Sunday.

“At times we showed tremendous potential,” Dupic said. “There were a lot of good things. We made pitches at times and our guys hit the ball well, but we looked like a team that had not been outside much. We made some defensive mistakes and didn’t execute pitches in that second game. Those things can be disappointing, but we just haven’t had much chance to be out on a field. Hopefully we’ll learn from those things and keep getting better.”

Already the program’s all-time strikeout leader, Munsch took the ball in game one and put together five impressive frames. He struck out nine batters while allowing one unearned run on two hits and two walks. He quieted a McPherson offense that piled up 63 runs during a four-game series sweep of Missouri Valley College a week earlier.

Ryan Samuelson then fired the final two innings of the opener and picked up the save. He fanned three hitters to bring the combined strikeout total to 12 in the victory.

“Munsch was sharp. He was really good,” Dupic said. “He went up against a very good offensive lineup. He was able to execute his pitches well and stay in control.”

A 1-1 tie was broken in the top of the sixth when an error and a two-run single by catcher Ben Berg helped Concordia push across three runs. Berg and first baseman Evan Bohman collected two hits apiece in the win. Bohman drove in the first run of the season in the first inning with a two-out RBI single to score Wade Council (leadoff double).

Bohman went 5-for-6 on the day with a double and four RBIs. In his return after missing the 2019 season with an injury, second baseman Thomas Sautel notched three hits, including a pair of doubles. Center fielder Keaton Candor added three hits and three RBIs. In addition, freshmen Jayden Adams and Jakob Faulk made their Concordia debuts while starting on the left side of the infield.

The second contest became a slugfest before darkness halted play. Dupic had used five pitchers to get through six innings. McPherson (4-1) took a 14-11 lead by scoring seven times in the bottom of the sixth. They effectively answered the four runs Concordia had put up in the top half of the inning. Jake Fosgett started on the mound and gave way after an inning of work.

Property tax bill in limbo with Nebraska session on pause