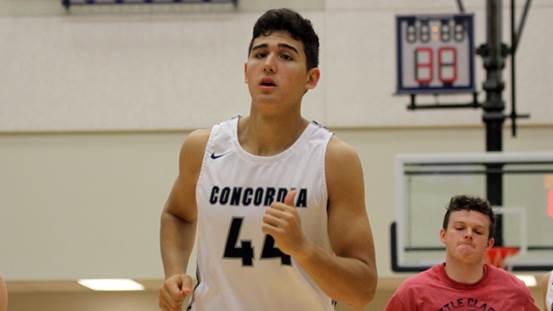 FREMONT, Neb. – What a difference three months makes. The meeting between the Concordia University men’s basketball team and Midland that took place in Fremont, Neb., on Wednesday (Feb. 19) looked nothing like the matchup that occurred way back on Nov. 12. In the latest renewal of the rivalry, both teams shook off rough offensive starts and went hog wild in the second half. Ultimately, the Bulldogs did just enough to pull out the road win, 89-83.

At this point in the season, head coach Ben Limback’s squad isn’t looking for style points. The victory keeps hopes alive of earning a GPAC tournament quarterfinal home game and moved the Bulldogs (20-9, 11-8 GPAC) to 20 wins on the season.

“On the road it was a gutsy performance,” Limback said. “Give Midland a lot of credit. In that second half they really torched us. We couldn’t stop them. They started making threes all over. I thought we ran out of gas a little bit and gave up some second-chance points, but I’m so proud of our guys to gut this one out. It wasn’t pretty, but you’ve got to do it anyway you can.”

After senior Brevin Sloup drilled a 3-pointer that made it a 31-17 lead late in the first half, Concordia looked like it might just waltz to victory at the Wikert Event Center. The young Warriors had other ideas. They poured in 10 second-half triples. Their final trey of the night put the Bulldogs in a 79-73 hole with less than four minutes to play.

That’s when the tough got going. Sloup, who had 17 of his game high 22 points in the second half, ignited a 12-0 run with a three-ball. Tanner Shuck, Carter Kent and Justin Wiersema also contributed offensively to the game-defining surge. It couldn’t have happened without tightening the screws defensively. Midland did not make a shot from the field after the 3:44 mark.

Both teams put up exactly 58 points in the second half. Bowen Sandquist (22 points), Laurence Merritt (19 points) and Samuel Mailloux (15 points) did most of the damage for Midland, which had to have a win to keep alive any hope of a GPAC tournament berth. Instead, the Warriors were swept this season by Concordia.

The Bulldogs played without Chuol Biel on Wednesday. Sophomore Gage Smith got the start and produced eight points and 11 rebounds. Fellow sophomore Klay Uher also factored large into the outcome. He notched 14 points and six rebounds while going a perfect 5-for-5 from the field.

“He had some nice pick-and-rolls and some nice finishes at the rim,” Limback said. “He was really good on defense as well. Tanner Shuck was big too. He had a lot of great moments when we needed them. I’m just proud of our guys on this one.”

Limback also lauded the work of Sloup and Wiersema. Sloup added five assists and five rebounds to his stat line. A budding performer in the backcourt, Wiersema tallied 16 points and blocked a pair of shots. The reliable Shuck registered a double-double with 18 points and 11 rebounds. Concordia shot 51.7 percent from the floor. It’s biggest detriment was a minus-eight turnover margin. Midland (9-17, 5-14 GPAC) managed to turn it over only four times.

The long road to North Dakota awaits. The Bulldogs will be at Jamestown (18-10, 9-9 GPAC) on Saturday for a 4 p.m. CT tipoff. In this season’s first matchup, Concordia rode a 26-point outing from Tanner Shuck to an 86-74 home win over the Jimmies. In order for the Bulldogs to earn another home game, they must win at Jamestown and have Northwestern (12-7 GPAC) fall at home to No. 2 Morningside.