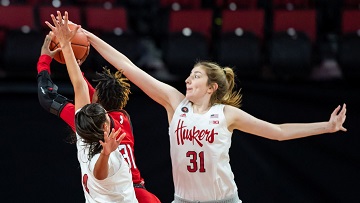 Lincoln – Nebraska center Kate Cain was one of just 15 women’s basketball players across the country to be named to the Naismith Defensive Player of the Year Watch List when it was announced on Tuesday, Jan. 26 by the Atlanta Tipoff Club.

Cain has started 104 consecutive games for the Big Red. She leads the Big Ten with 3.1 blocks per game this season. With Cain protecting the rim, Nebraska has knocked off three top-25 opponents including then-No. 15 Ohio State (Jan. 16). Cain nearly produced her second career triple-double in the 63-55 win over the Buckeyes, finishing with 22 points, 12 rebounds and nine blocked shots, which tied the second-best total in school history. Cain’s defensive performance allowed Nebraska to hold Ohio State 35 points below its season scoring average heading into the game. She recorded a triple- double as a freshman with 22 points, 14 boards and a school-record 11 blocks in a win over Florida Atlantic (Dec. 19, 2017).

Cain, who earned her bachelor’s degree as a management major in just three years, is pursuing her MBA as a graduate student. A strong candidate for CoSIDA Academic All-America honors, Cain is a two-time Big Ten Distinguished Scholar and a two-time Academic All-Big Ten selection. She also has been projected as a second-round WNBA Draft pick in 2021.

Cain and the Huskers return to the court on Thursday night when they play host to Wisconsin. Tip-off between Nebraska and the Badgers at Pinnacle Bank Arena is set for 7 p.m. 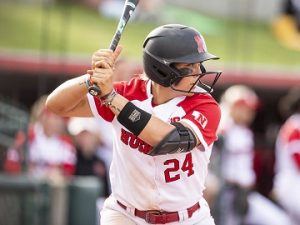