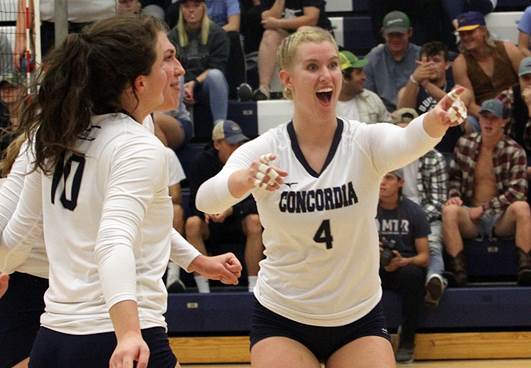 SEWARD, Neb. – A marker of the strong season she’s had, junior Tara Callahan has collected the GPAC/Hauff Mid-America Sports Women’s Volleyball Setter of the Week award for the fourth time this season. In addition to being announced as the winner of the award on Tuesday (Oct. 29), Callahan garnered the same accolade on Sept. 3, Sept. 10 and Oct. 15. She has picked up this honor a total of five times in her career.

Callahan quarterbacked the Concordia offensive attack to GPAC road wins over Briar Cliff (five sets) and Mount Marty (three sets) in last week’s action. Over those two matches, Callahan compiled 88 assists, 11 digs, six kills and five blocks. She racked up 57 assists in the victory over Briar Cliff, which required the Bulldogs to come back from a 9-6 deficit in the fifth set. Callahan’s work also led to a big week for senior middle blocker Emmie Noyd, who recorded 31 kills and hit .422 last week.