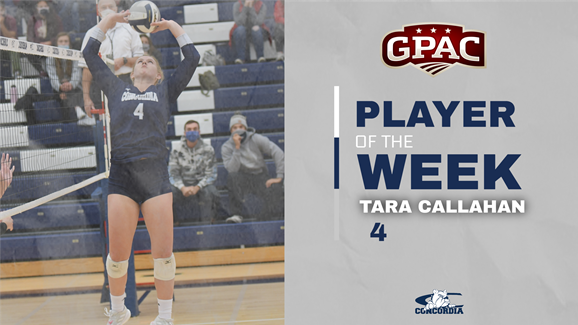 SEWARD, Neb. – For her role in two GPAC victories last week, senior Tara Callahan has been named the GPAC/Hauff Mid-America Sports Setter of the Week, as announced by the conference on Tuesday (Nov. 3). Callahan has garnered GPAC weekly honors for the first time this season and for the seventh time in her career. Callahan is the second Bulldog to collect a conference award in 2020, joining freshman Gabi Nordaker (NAIA National Attacker of the Week on Sept. 22).

Over last week’s straight-sets wins over College of Saint Mary and Doane, Callahan totaled a combined 71 assists for an average of 11.83 per set. She also added 11 digs, two kills and two aces. An honorable mention All-American last season, Callahan continues to spread the ball around to a variety of attackers. Five different Bulldogs have recorded more than 115 kills in 2020. Among all players in the NAIA, Callahan ranks fifth in assists per set (11.04) and seventh in total assists (552).

The native of Brady, Neb., has achieved career totals of 3,306 assists (third most in program history), 554 digs, 273 kills and 170 blocks. Callahan has earned some form of All-GPAC recognition each season of her collegiate career.

The Bulldogs (12-3 GPAC) were scheduled to play Tuesday (Nov. 3) at Hastings, but that match has been postponed. A makeup date is yet to be determined. That match will be the final one of the conference regular season for Concordia.