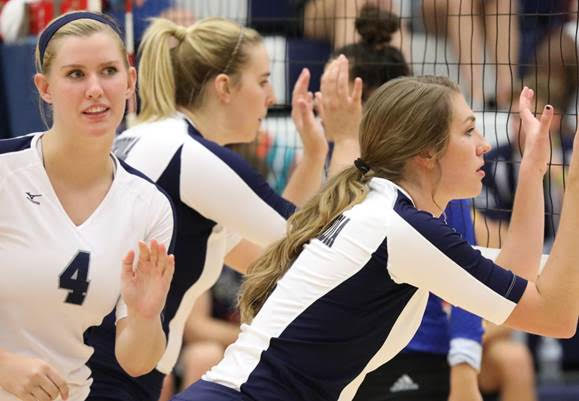 SEWARD, Neb. – Leaders in the Concordia University volleyball team’s incredibly efficient attack, junior Tara Callahan and senior Emmie Noyd have raked in GPAC weekly awards, as announced on Tuesday (Sept. 10). Callahan has been named the GPAC/Hauff Mid-America Sports Setter of the Week while Noyd has been chosen as the GPAC/Hauff Mid-America Sports Attacker of the Week. Callahan has earned the setter award for the second week in a row.

Callahan continues to distribute the ball for an attack that tops the NAIA in hitting percentage (.300). As part of last week’s four victories, Callahan averaged 11.54 assists per set (150 total assists). She also contributed 28 digs, 12 kills and five blocks. Her 43 assists versus Baker University (Kan.) capped off the week that also included wins over No. 14 Hastings, Graceland University (Iowa) and Haskell Indian Nations University (Kan.). The Brady, Neb., native currently ranks third among all NAIA setters with an average of 11.69 assists per set.

Noyd has been the team’s most dominant force. The two-time second team All-GPAC honoree from Shelby, Neb., tops the team with 134 kills (3.94 per set) and her .394 hitting percentage ranks her first in the GPAC and fourth nationally. Last week Noyd hit .406, hammered 48 total kills and had 12 blocks. She went for a match high 15 kills in the victory over Hastings.