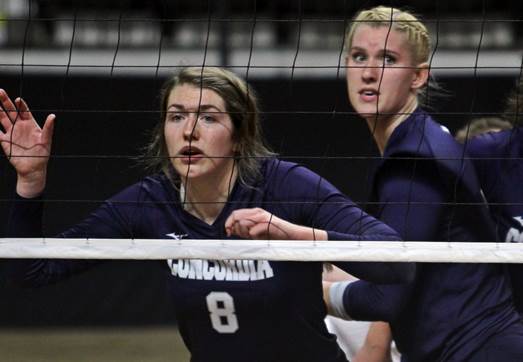 SEWARD, Neb. – Both instrumental in steering the Concordia University volleyball program to new heights, junior Tara Callahan and Emmie Noyd have been recognized with All-America honors from the NAIA and the American Volleyball Coaches Association (AVCA). Noyd landed on the All-America third team while Callahan garnered honorable mention status. Both Callahan and Noyd were also named to the AVCA’s NAIA West Central Region team last week.

Noyd and Callahan are the first Bulldog volleyball student-athletes to be chosen as All-Americans since Jocelyn Garcia and Alayna Kavanaugh collected honorable mention accolades in 2015. Noyd is the first Concordia volleyball player to claim first/second/third team All-America selection since Rachel (Kirchner) Miller was placed on the NAIA’s third team in 2001.

Also a first team All-GPAC choice, Noyd finished her senior season with 403 kills (3.36 per set) and 131 blocks while hitting .327. Not since Katie Werner posted 439 kills in 2007 had a Bulldog eclipsed 400 kills in a single season. During the four matches at the national tournament, Noyd totaled 57 kills and 16 blocks. Her 21 kills in the victory over the University of Saint Mary (Kan.) represented a season high. In her career, Noyd tallied 973 kills and 376 blocks. The native of Shelby, Neb., was named second team all-conference in 2017 and 2018.

Callahan, a first team all-conference setter, developed into one of the nation’s top setters in 2019. She ranked ninth nationally in assists per set (10.74) while quarterbacking an offense that hit .233 (14th in the NAIA) and averaged 13.52 kills per set (17th nationally). Throughout the fall, Callahan reeled in five GPAC Setter of the Week honors. In her career, the native of Shelby, Neb., has piled up 2,754 assists, 468 digs, 251 kills and 175 blocks.

Concordia finished the 2019 campaign at 25-8 overall and reached the round of 16 at the NAIA Volleyball National Championship.