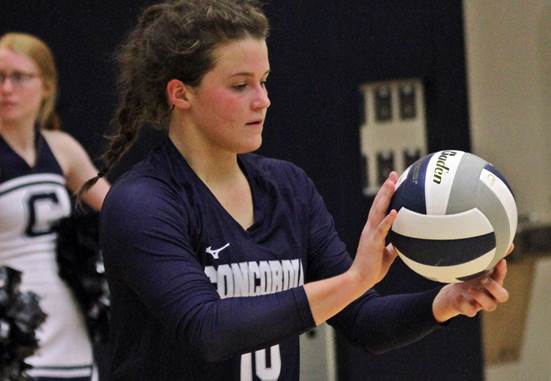 SEWARD, Neb. – Five members of the national qualifying Concordia University volleyball team have been named 2019 all-conference selections, as announced by the GPAC on Wednesday (Nov. 19). Junior Tara Callahan and senior Emmie Noyd were chosen as first team honorees while Camryn Opfer pulled in GPAC Freshman of the Year accolades and landed on the second team. Honorable mention went to juniors Marissa Hoerman and Kara Stark.

Collectively, they have helped lead head coach Ben Boldt’s squad to a 23-6 overall record and a spot at the final site of the 2019 NAIA Volleyball National Championship. Pool play will begin on Tuesday, Dec. 3.

Callahan garnered first team selection after being tabbed as honorable mention as both a freshman and sophomore. The native of Brady, Neb., has established herself as one of the nation’s top setters. This fall she has collected five GPAC Setter of the Week awards and was named the NAIA National Setter of the Week on Sept. 10. Currently, Callahan ranks 11th nationally with an average of 10.71 assists per set (1,135 total assists). In her career, Callahan has accumulated 2,590 assists, 442 digs, 243 kills and 167 blocks.

Noyd has often been the beneficiary of Callahan’s passing. Also a two-time second team All-GPAC choice, Noyd is enjoying the best season of her career. Among all NAIA players, the star middle blocker ranks 23rd in hitting percentage (.326) and 27th in blocks per set (1.10). Noyd’s 346 kills are the most for a squad ranked 15th nationally in hitting percentage (.232). Noyd also earned one GPAC Attacker of the Week honor in 2019. Her career totals stand at 916 kills and 360 blocks to go along with a .307 hitting percentage.

Opfer’s addition has been critical to this season’s success. The Seward High School product is the program’s first-ever GPAC Freshman of the Year. In her first season with the Bulldogs, Opfer has notched 280 kills (2.67/set), 272 digs (2.59/set) and 39 blocks while hitting .212 from the outside. She has posted 10 or more kills 14 times this season with a high of 19 coming in the win at Briar Cliff.

Hoerman is the leader of a back row that has helped limit opponents to a .155 hitting percentage on the season. The native of Evergreen, Colo., paces the team with a career high 398 digs (3.75/set) while playing in all 106 sets this season. She has also passed serve receive at a 95.4 percent rate and has added 32 aces. She posted a season high of 25 digs on two occasions. In her career, Hoerman has totaled 1,122 serve receptions, 979 digs and 50 aces.

Stark provides another potent attacking option on the outside. She ranks third on the team with 249 kills (2.68/set). The native of Frisco, Texas, has collected 10 or more kills in 17 matches this season with a high of 17 versus Midland on Sept. 14. Stark has piled up 385 kills and 55 blocks in 151 career sets played.

Work will begin on N-21, north of Lexington in Dawson County

Bulldogs grind out regular-season sweep of Midland, move to 4-0

Heritage races to GPAC Runner of the Week honors