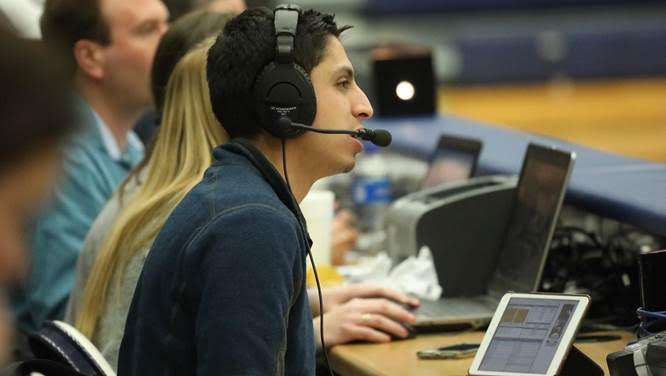 When big moments have occurred over the past four years for Concordia University football and basketball, Tyler Cavalli has been there to document it. One would turn the dial to 104.9 Max Country and swear they had come across a Big Ten game or had stumbled upon a major national broadcast. He will tell you he makes mistakes, but it sure seems as if Cavalli routinely mixes the proper blend of descriptive language, excitement and inside knowledge along with a deep voice perfect for illuminating athletic contests and the unpredictability that ensues.

Cavalli will continue to be a mainstay in sports radio for many years to come, but he will shift away from Concordia Athletics beginning in 2020-21. He will focus his efforts on his role as Program Director at KRVN, located in Lexington, Nebraska. For the past two years, Tyler and his wife Aspen have lived in Kearney, nearly two hours away from Seward.

“I don’t know how much more lucky we could be that we both got promotions and were allowed to grow in our careers,” Cavalli said. “Unfortunately, it took me away from the Seward/York area. For two years I was still able to broadcast all of the games and go back-and-forth from Kearney. Where I’m at now in the Program Director position, there’s a lot that goes with it and a lot of duties that go with it. It’s been a challenge to do everything the right way. I didn’t feel like I could give it my all for Concordia and give it my all for my position here. That’s the reason for this decision.”

Cavalli began working Bulldog football and basketball games during the 2016-17 academic year. In his first season of football, Cavalli served alongside Jayson Jorgensen (KRVN Sports Director) before taking over the play-by-play role for the next three seasons. Cavalli has spent each of the past four years as the voice of Concordia men’s and women’s basketball. He called the 2018 and 2019 women’s basketball national championship games and was present for the men’s basketball program’s first national tournament appearance in 15 years.

As the buzzer sounded and the confetti wafted from the rafters in Sioux City in March 2019, Cavalli exclaimed, “Bulldogs, for the first time in program history, are national champions!” Back in 2017, Cavalli and color commentator Roger Fitzke put on a broadcasting clinic in describing a Tarence Roby 100-yard zig-zag interception return for a touchdown. Fitzke called it the best play anyone would see in college football all weekend. In a very complimentary manner, Cavalli described the All-American Roby as a “bad, bad man.”

Those are likely some of the best on-air memories for Cavalli, but the behind-the-scenes moments were just as special. The relationships that were formed influenced Cavalli to care more deeply about the outcomes – and the people in particular. Said Cavalli, “Seeing (the women’s basketball) team win the national championship is one of my all-time favorite memories of my life just because it was such a special moment, not for me necessarily, but just being there and witnessing history. There were the relationships you build with the coaches that became tighter each year and the trust that grew. Coaches could tell me stuff off air that they knew I wouldn’t repeat on air. It would help me understand what was happening and allow me to articulate things in a way that wouldn’t call somebody out.”

Cavalli also referred to the road trips as “some of my favorite memories.” Cavalli became the first Bulldog broadcaster to call the Concordia Invitational Tournament on radio and was there for a total of 15 women’s basketball national tournament games since 2017. He hasn’t missed a single Bulldog football game since the 2016 campaign while making trips as far away as Jamestown, North Dakota. He has also traversed to Florida for a women’s basketball holiday tournament.

Those who only follow the Bulldogs might not realize that Cavalli has also been a fixture for high school sports and has called roughly 10 state championship games already in his career. Though still young in a broadcasting career that was in the works prior to him attending the University of Nebraska-Kearney, Cavalli has gained a lot of fans. He excelled at such a level that Concordia Athletics came to consider him a special and integral part of the family. His talents have brought greater attention to the Bulldogs in ways that can’t be measured.

Says Cavalli, “The first thing that comes to my mind when I think of Concordia Athletics is family. In my four years of broadcasting Bulldog Athletics, it really felt like a family from the administration down to the coaches and players.”

It’s easy to appreciate someone who so clearly exhibits a passion for his craft in the way that Cavalli does. He says he first got hooked after listening closely to the Colorado Rockies public address announcer while attending games at Coors Field. Cavalli began to hone his skills as a student at UNK and caught on quickly. The unpredictability of the role and sports in general were a huge draw for the budding star.

“I really love doing it because it’s totally different every day and every night when you go to a ballgame,” Cavalli said. “You never know what to expect. No game is the same as the other. You can think that with your prep, your scouting and talking to coaches that it’s going to go this way, but it’s not always going to follow that outline. I get the chance to relay the story to the listener with wording, emotion and letting the crowd into it. All of that is fascinating and a fun part of it.”

Cavalli can rattle off the names of many broadcasters he’s looked up to as he’s aspired to get better and better. Of course Jorgensen is one of his mentors. Cavalli calls Jorgensen “one of the best I’ve ever heard.” Cavalli has also taken bits from well-known play-by-play voices such as Mike Breen, Joe Buck, Kevin Harlan, Gus Johnson, Mike Tirico and others. He then develops his own style complete with a large array of verbiage.

Cavalli’s ability to paint a picture with words has made him a popular figure within Concordia Athletics. It’s not uncommon for parents of student-athletes to seek him out before or after games in order to compliment his work.

“Thank you for listening,” Cavalli said when asked about what message he would give Bulldog fans. “In radio you never know who is listening. I appreciate the feedback, whether it’s good or bad. Just getting to know the parents and local community members that are listening and talking with them has been awesome. Being able to talk with parents or staff has allowed me to tell the stories of the players because they always give you little nuggets. They make you feel like you know what you’re doing. I really appreciate the support.”

In a professional capacity, Cavalli had never broadcasted collegiate sports before joining the team at Concordia. He was thrown into the fire and did a whole lot more than just survive. His loss from Bulldog sporting events will be felt. Said Cavalli, “I’m grateful to Concordia for giving me the chance four years ago. I’ll always be grateful for that.”

Patrick Daberkow, Head Football Coach
Tyler has been an integral part of the Bulldog football game day experience.  He’s always good at finding positives and capturing the action. He’s made the radio coverage of Bulldog football top notch and I’ll personally miss talking to him after games and the weekly coaches show.

Ben Limback, Head Men’s Basketball Coach
Tyler truly felt like a member of our Bulldog Family and I’m grateful for the time I was able to work with him. He didn’t just cover games. He went above and beyond to learn names and all the current information on our team. I know our parents and listeners appreciated the work he put in. His professionalism, passion and attention to detail will surely be missed!

Drew Olson, Head Women’s Basketball Coach
We will miss Tyler greatly. He is the best at bringing Bulldog athletics to the fans. I appreciated how professional Tyler was – the research beforehand, how he communicated with the players and coaches. There were some amazing games he was a part of and his calls made them even more memorable.