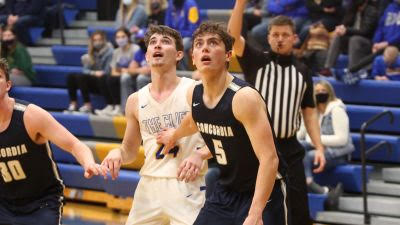 SIOUX CITY, Iowa – The Concordia University Men’s Basketball team ran into a buzz saw in the form of Briar Cliff on Saturday (Dec. 5). The host Chargers got comfortable from the outside and netted 18 treys while pulling away from the Bulldogs for an 89-75 victory inside the Newman Flanagan Center in Sioux City, Iowa. Previously, Concordia had not been beaten by a conference opponent since Feb. 8 of last season.

It was just one of those days for Head Coach Ben Limback’s normally stout defensive squad. The Bulldogs (8-2, 5-1 GPAC) had won eight in a row overall and 12-straight matchups against GPAC foes.

“We turned it over too much and defensively, once they started hitting threes we got too spread out and we were getting carved up at the rim for layups,” Limback said. “You have to hand it to Briar Cliff. They did a great job of executing today, but we’re not going to win a lot of games on the road in the GPAC with 23 turnovers and allowing them to shoot almost 60 percent in the second half.”

A trey by Justin Wiersema in the final minute of the first half actually gave the Bulldogs a lead, 39-38, at the break. Out of the gates in the second half, Groves initiated a 16-2 run with back-to-back triples. The Charger lead eventually grew to as many as 19 points in a game that got away from Concordia.

Despite shooting 49.2 percent (29-for-59) from the floor, the Bulldogs were unable to keep up. Four Concordia players hit double figures in scoring: Carter Kent (15), Gage Smith (14), Wiersema (11) and Jackson Hirschfeld (10). Kent also paced the squad with eight rebounds. Off the bench, Klay Uher (eight points (4-for-5 from the floor) and Grant Wragge (six points, seven rebounds) were big contributors. The Bulldogs owned a large 42-22 advantage in rebounding.

Briar Cliff had been coming off back-to-back losses to Dordt and Northwestern. It hasn’t been out of the ordinary for the Chargers to rely on outside shooting. They have now made 14 or more 3-point field goals five times this season.

In a GPAC race that could prove to be wide open, the key for Concordia is to bounce back quickly. Only Dakota Wesleyan (3-0 GPAC) is without a GPAC loss.

“How you handle losses is extremely important,” Limback said. “You have to learn from them. Our attitude needs to be really good on Monday at practice with how we respond. Every win of that streak, whatever it was at, we just took one game at a time. We have to keep doing that.”

The Bulldogs will finally be back inside Friedrich Arena on Wednesday when Mount Marty (6-4, 3-2 GPAC) will be in town for a 7 p.m. CT tipoff. The start time was moved up an hour due to the postponement of the women’s game.