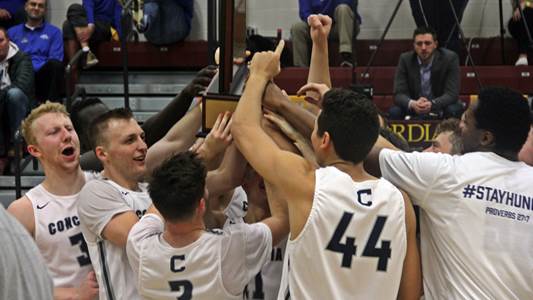 Head coach Ben Limback has been the leader for six CIT titles in his career (including two at Concordia University, Ann Arbor). The Bulldogs have captured 28 CIT titles in the program’s history. It was time for the trophy to return to Seward.

“Every year it’s special, but to bring home the championship makes me so happy for the guys,” Limback said. “Just the way we played made me really proud. I was proud of us offensively and defensively. The guys fed off that and continued that throughout the whole game.”

CUNE had basically decided the game by halftime against a Falcons team that had steamrolled Concordia University, Chicago, 106-74, a day earlier. CUW found out what many Bulldog opponents have come to realize lately – it’s a real chore to defend a squad with so many capable 3-point shooters. The Bulldogs canned 15-of-34 shots from long range in an impressive shooting display.

Shuck is balling right now. He poured in a game high 18 points while scoring in a variety of ways. Carter Kent found plenty of space in the first half by drilling four treys on his way to 13 points. Sam Scarpelli also hit on three treys, including a halftime buzzer beater that made it 53-33 at the break. Named all-tournament, Scarpelli continues to provide an edginess to this team.

Off the bench, Ryan Holt brought the thunder. His one-handed slam in the face of contact brought the house down during the second half onslaught. Justin Wiersema also played a starring role by notching 15 points on 6-for-9 shooting from the floor. He also dished out four assists. Meanwhile, Biel played tough inside and put up seven points and 12 rebounds. His one blocked shot was a highlight reel denial.

The senior group of Shuck, Brevin Sloup (eight points on Saturday) and the crew would have found it unacceptable not to bring the oversized trophy back to Seward. Said Shuck, “The last two years have been really tough, losing in the first round especially. We knew right away this year, we set goals and this was one of them to win CIT. We stuck together and did what we had to do. We came out on top and it was a lot of fun.”

CUW employed the reigning CIT MVP in Jordan Johnson, who was held to 4-for-14 shooting. Not much went as planned for the Falcons (10-7), who went only 3-for-16 from 3-point range. CUW shot just 31.3 percent from the floor compared to 47.9 percent shooting by the Bulldogs.

“The guys were on a mission,” Limback said. “The leadership in the locker room is big. The guys were ready to play. We say stay hungry and this team wants to accomplish big things. They understand the process to it and they understand what comes with it. The team camaraderie makes it special.”

The Bulldogs will get back to conference play on Wednesday when Northwestern (15-7, 7-5 GPAC) makes a visit to Walz Arena for an 8 p.m. CT tipoff. When two sides met in Orange City, Iowa, on Jan. 2, CUNE cruised to an 88-65 blowout over the Red Raiders. Northwestern was ranked 19th nationally at the time, but has since dropped out of the poll.