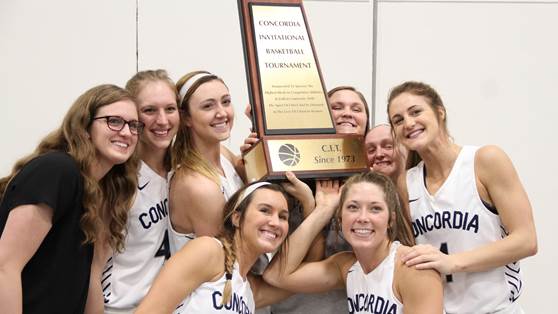 RIVER FOREST, Ill. – The Concordia University, Nebraska women’s basketball program has taken ownership of the Concordia Invitational Tournament. It hasn’t just won seven CITs in a row, it has dominated them. This year it was again Concordia University, Wisconsin’s turn to get dismantled in the CIT championship game by the Bulldogs. CUNE forced 32 turnovers in a 102-47 victory.

CIT MVP honors went to Grace Barry, the fuel that powers the engine of 14th-year head coach Drew Olson’s squad. Olson has presided over 11 of the program’s 30 all-time CIT championships. The Bulldogs moved to 20-2 overall.

“It’s definitely an expectation we have for our program (to win CIT),” Olson said. “Any time you win a championship, you win a trophy and you continue to have that pride in being the best Concordia – it still definitely feels good.”

CUNE dealt with foul trouble, but its depth and full-court pressure never allowed the Falcons (10-7) to get comfortable. There were several occasions that saw CUW have major difficulty advancing the ball past the timeline and it managed only five made field goals for the entire first half. In addition, senior Colby Duvel provided a major lift offensively with 13 of her game high 19 points coming in the first half.

Blink and you might miss a massive run by these Bulldogs. They turned a modest 20-14 lead midway through the second quarter into a 48-26 halftime lead. The large spread allowed for playing time to be spread out once again. Barry finished with 10 points, eight assists and two steals while doing most of her damage in the second half. The bench took it from there.

Sophomore Chloe Schumacher went wild late in the contest and finished with 13 points on the strength of 4-for-6 shooting from beyond the arc. The CUNE reserves outscored CUW themselves, totaling 56 points. The bench was responsible for 10 of the 13 Bulldog treys on the evening. Elsie Aslesen put up nine points and Delani Fahey and MacKenzie Helman chipped in eight points apiece.

The Bulldogs were especially impressive in the third quarter when they feathered the Falcons to the tune of a 33-9 score. Name a statistic and CUNE had the advantage, like its 44-36 edge in rebounds. The Bulldogs pilfered 23 steals, including five by the pesky Riley Sibbel.

Lammers joined Barry on the CIT all-tournament team. Lammers totaled 24 points on the weekend. She was the 2019 CIT MVP. Barry also had 20 points, seven assists and six steals in Friday’s win. This was a sterling final CIT for the seniors such as Barry, Lammers and Duvel.

“It’s one of our goals early on in the season (to win CIT),” Duvel said. “It’s about coming together with all the Concordias and competing our hearts out. It’s special to get to play here at CIT and to get to do it four times with all of my senior teammates.”

Trophy celebrations have become commonplace for Duvel and those seniors. They are doing their best not to take it for granted. Joked Duvel, “As the times change the poses change.”

Barry and the Bulldogs have reached the 100-point mark 10 times this season. Their offense re-ignited over the final three quarters versus CUW. The day before, CUNE toppled Concordia University, Ann Arbor, 74-49.

The Bulldogs will return to Seward for some home cooking on Wednesday when they will host 17th-ranked Northwestern (12-7, 7-7 GPAC) for a 6 p.m. CT collision. In this season’s first meeting in Orange City, Iowa, CUNE topped the Red Raiders, 97-81. The Bulldogs have won 10 of the last 11 matchups in the series.