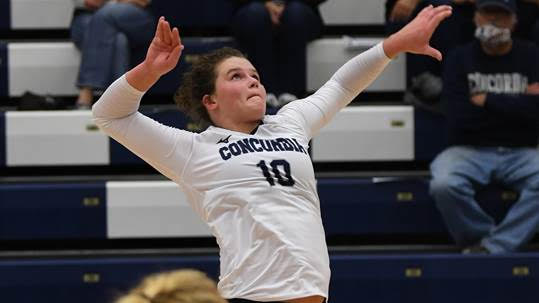 OMAHA, Neb. – Coming off a challenging and lengthy road trip, the Concordia University Volleyball team made a shorter journey on Tuesday (Oct. 20) and got a much more favorable result. A cleaner brand of volleyball did wonders for the Bulldogs, who rode a hot start to a 25-13, 25-20, 14-25, 25-21, victory at College of Saint Mary, located in Omaha. This was a matchup between programs that both finished the 2019 season ranked in the top 25 of the NAIA.

Head Coach Ben Boldt liked the way his team regrouped after enduring back-to-back losses over the weekend. The Bulldogs (8-3 GPAC) have an opportunity this week to perhaps solidify themselves as a top-three team in the conference.

“We played a much cleaner game,” Boldt said. “We were a lot more efficient when we needed to be. Down the stretch, College of Saint Mary started taking some really big swings. We had some really good blocking that was the difference. It was also some good digs and out-of-system swings. We played a lot cleaner and a lot tougher at the net.”

The third set represented an outlier for Concordia, which had a negative hitting percentage during that stretch. However, the Bulldogs hit .375 or better in each of the other three sets. They relied on their own ability at the net in those instances. Following the direction of setter Tara Callahan (48 assists), Concordia put away 13 kills in the first set, 18 in the second set and 17 in the fourth set.

Callahan most frequently called upon the likes of four teammates who each had double-digit kill totals: Camryn Opfer (13), Gabi Nordaker (12), Kara Stark (11) and Kalee Wiltfong (11). Nordaker (who had the match-clinching kill) hit .417 in the middle while adding five assisted blocks. Arleigh Costello topped the team in the block category with six (five assisted). Concordia owned an advantage of 9-5 in blocks and outhit the host, .275 to .197, for the evening.

This Bulldog team is a reflection of a coaching staff that never wavers or shows panic after defeat. Concordia is ready to attack the stretch run of the GPAC regular season.

“We definitely worked on our ability to refocus and stay connected,” Boldt said. “We did a much better job with that this match. It’s never going to be perfect – it’s always something that’s going to be evolving. I thought we grew tonight. We want to continue to have a growth mindset. Whether we win or lose, we want to stay connected. I thought we did a really good job of that.”

Other leaders for Concordia included Marissa Hoerman with 19 digs and Callahan and Tristin Mason with two aces apiece. On the other side of the net, Elizabeth Dlouhy (15 kills, .370 hitting percentage) had the most success for the Flames (7-6, 2-6 GPAC). Dlouhy and company did make a push in the fourth set (trailed 23-21) before falling short. CSM has lost five-straight matches (all within the GPAC).

Fans of the Bulldogs will have a couple of opportunities to catch Concordia at home this weekend. The Bulldogs will host Briar Cliff (8-12, 3-9 GPAC) at 7:30 p.m. CT on Friday before welcoming Morningside (7-6, 6-4 GPAC) for a 4 p.m. match on Saturday. The matchups will mark the first and only meetings between these respective sides in the 2020 regular season.