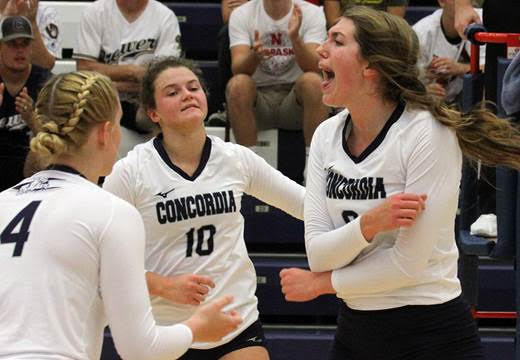 SEWARD, Neb. – This one got the heart beating rapidly for anyone with a dog in the fight. The Concordia University volleyball team showed that it belonged on the other side of the net of ninth-ranked Midland, an NAIA national semifinalist a year ago. The Warriors displayed some championship mettle and resilience of their own by pulling out the victory, 22-25, 27-25, 22-25, 25-9, 15-13, inside Walz Arena on Saturday (Sept. 14) afternoon.

For the second year in a row, the Bulldogs were handed a defeat by Midland after a 12-0 start. Head coach Ben Boldt’s squad now stands at 12-1 (2-1 GPAC).

“We had our opportunities,” Boldt said. “We had a lot of service errors through those first couple of sets. Those last couple sets we locked down our serving a little better. We need to keep working on our passing. That was the toughest serving team that we’ve played all year. We have to put our heads down and get back to work.”

At times on Saturday, Concordia appeared poised to claim the program’s most significant win since the 2015 national tournament season. Star senior middle blocker Emmie Noyd went through stretches where she was virtually unstoppable. The native of Shelby, Neb., really got going with eight of her match high 20 kills coming in the third set. Walz was rocking when freshman Kalee Wiltfong’s kill ended the third set and gave the Bulldogs a 2-1 match lead.

The discrepancies in serve and pass were ultimately the difference. Midland (11-3, 3-0 GPAC) came out like gangbusters in a fourth set dominated by the visitors. Concordia never gained traction and had only three kills in the fourth set. For the match, the Warriors had 11 aces to five service errors while the Bulldogs had four aces to nine service errors.

As rough as it got the fourth set, Concordia recovered to give itself a shot all the way to the end in the fifth set. A combined block by Noyd and Camryn Opfer made it 11-10 before Midland made its winning push. Taylor Peterson (team high 16 kills) put away point Nos. 14 and 15 with kills to end the Bulldog upset bid.

A win on Saturday would have excitedly capped what was still a solid week in the GPAC for Concordia, which knocked off No. 25 College of Saint Mary on Wednesday. Both from a physical talent standpoint and a mental growth standpoint, the Bulldogs remain in a position to do something special.

“There were plenty of bright spots,” Boldt said. “We’re a team that’s growing up.”

While Noyd piled up 20 kills and eight blocks, junior outside hitter Kara Stark had a nice match of her own with 17 kills and a .419 hitting percentage. Tara Callahan notched 47 assists. Defensively, Opfer (14), Kaylie Dengel (13) and Marissa Hoerman (13) each had double figure digs totals.

Midland employs multiple servers who spray bullets over the net. Taliyah Flores (four), Brooke Fredrickson (three) and Kaitlynn Simon (three) each had at least three aces – and they did it against a Bulldog squad that had been stellar in that area. Maddie Wieseler (12) and Maggie Hiatt (11) joined Peterson as Warriors to reach double digits in kills.

The Bulldogs will hit the road on Tuesday for a matchup at Morningside (8-4, 0-3 GPAC). First serve for the varsity match will be at 7:30 p.m. CT with the junior varsity at 6 p.m. The home team won both meetings between the two sides in 2018.