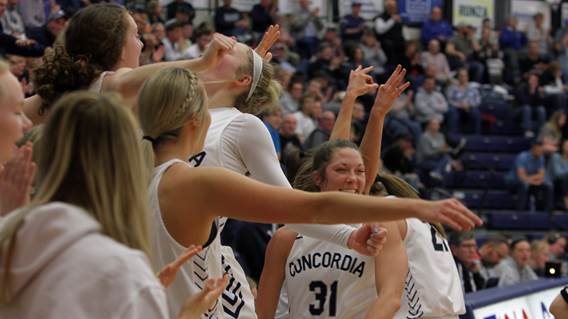 SEWARD, Neb. – It’s fair to marvel at the consistent excellence of a powerhouse Concordia University women’s basketball program now set to make a fourth-straight appearance in the GPAC tournament championship game. There wasn’t a lot of flow to Saturday (Feb. 29)’s conference semifinal clash, but in the end, it was another double-digit home victory for the second-ranked Bulldogs. They turned away No. 12 Dordt, 94-79, inside Walz Arena.

Fourteenth-year head coach Drew Olson’s program has also reached the 30-win mark for the fourth year in a row. The senior group has also led Concordia to a 62-1 home mark over the past four seasons.

“It’s amazing what this group has done,” Olson said. “Especially the senior group over their four years. To continue to host a conference championship is really cool. We don’t take it for granted. We love it. We’re excited about it. It’s going to be a lot of fun Tuesday night.”

Saturday’s contest featured a combined 51 fouls and 64 free throw attempts. The Bulldogs were a rough 17-for-30 (.567) from the foul line, but their relentlessness in the press got to the Defenders (24-8), who turned it over 35 times. Their minus-12 turnover margin made it difficult to keep up despite shooting nearly 50 percent from the floor.

Senior Colby Duvel and company met a big Dordt team head on. Duvel (14 points and 10 rebounds) posted the second double-double of her career while mixing it up inside with the likes of Erika Feenstra and Rachel Evavold. Concordia actually finished with a 38-37 edge in rebounding over one of the nation’s top rebounding squads.

“We always know going against Dordt, they’re big and they have a physical presence inside,” Duvel said. “We just have to battle back. Calls are going to go your way and calls are going to go against you. You have to stay focused on what you’re playing for.”

There were certain points when it looked like the Bulldogs were going to mop the floor with the Defenders. Concordia took an 18-point lead (54-36) to halftime after Grace Barry pulled up for two in the final seconds of the second quarter. Dordt showed some toughness of its own by whittling a 24-point deficit down to nine with nearly seven minutes still remaining in the contest.

Did anyone really think this veteran team was going to fritter away that large of a lead? Nah. Philly Lammers initiated a 6-0 run with a bucket that restored order and allowed the Bulldogs to cruise down the stretch. Said Olson, “Overall I thought our players were awesome. I felt we just dominated the first half. Then in the second half we jumped on them early and the game got messy. I thought our kids did a good job of keeping their composure and being really tough mentally.”

Barry and Lammers equaled a game high with 17 points apiece (Lammers has run her career scoring total to 1,998). Mackenzie Koepke added 15 points, with two of those coming on some nifty shake N bake in transition. Riley Sibbel was responsible for five of the team’s 18 steals and the bench group (six points apiece from Rylee Pauli and Taryn Schuette) was productive.

Feenstra totaled 16 points and 11 rebounds for a Dordt team that is essentially a lock for a national tournament at-large bid. Karly Gustafson notched 12 points and eight rebounds off the bench.

The GPAC championship game has become an annual event at Walz Arena, which will host the title matchup for the fourth year in a row. Fourth-ranked Hastings (30-2) will be the opponent for a title matchup set for 7 p.m. CT on Tuesday (March 3). The home team won both regular-season meetings.