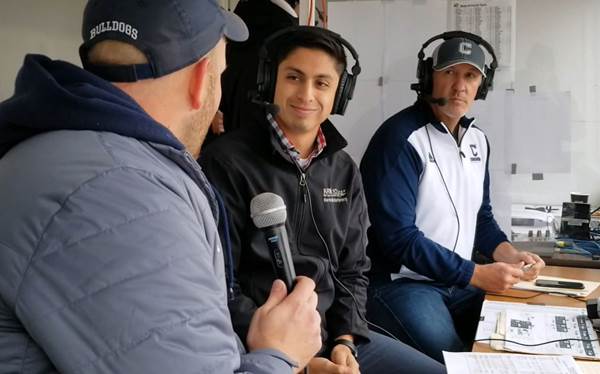 SEWARD, Neb. – Year five of the partnership between Concordia University Athletics and 104.9 Max Country is about to get underway. On Friday (Aug. 9), the two sides announced the radio broadcast schedule for the 2019-20 athletic year. Once again, 104.9 Max Country (KTMX-FM) will provide live play-by-play coverage for Bulldog varsity football, volleyball and men’s and women’s basketball games.

The newly announced radio broadcast schedule features nearly 75 regular-season contests, including 26 women’s basketball, 23 men’s basketball, 15 volleyball and all 10 football games. In addition, 37 Bulldog Coaches Shows will air throughout 2019-20. The first coaches’ show will run on Aug. 21. The Bulldog Coaches Show will continue to be broadcast at 5:30 p.m. CT every Thursday.

Concordia and 104.9 Max Country are in year two of a new three-year agreement that was announced in 2018 at the Bulldog Golf Classic. The contract extended a partnership that began with the 2015-16 campaign. Max Country, based out of York, Neb., has been the hub for live Concordia football, volleyball and men’s and women’s basketball ever since then.

Tyler Cavalli will again serve as the voice of Bulldog football and basketball and as the host of the weekly coaches’ show. Cavalli enters his fourth season handling play-by-play for both Concordia hoops squads. This will be his third year calling the action for Bulldog football. For the third year in a row, Roger Fitzke will be the color commentator alongside Cavalli. Meanwhile, former Bulldog softball coach Frank Greene is getting set to call volleyball action for the fifth-consecutive year on Max Country.

The Concordia Sports Network will continue to provide live video webcasts that can be accessed via http://www.cune.edu/athletics/watch-bulldogs for the bulk of varsity home events. CSN will incorporate the audio feed from 104.9 Max Country into its webcasts for football, men’s and women’s basketball and volleyball.

The reach of Max Country radio extends from the city of York and covers all of Lincoln and stretches nearly as far east as Omaha. It swings west into the Grand Island and Hastings areas. It travels as far north as Columbus and carries down south to Beatrice. Those not in the radio coverage area can tune in online or from their mobile devices by downloading the Max Country radio app.

If interested in partnering with Concordia athletics for radio sponsorships, please contact Devin Smith or Angela Muller in the athletic department. The main athletic line is 402-643-7328.