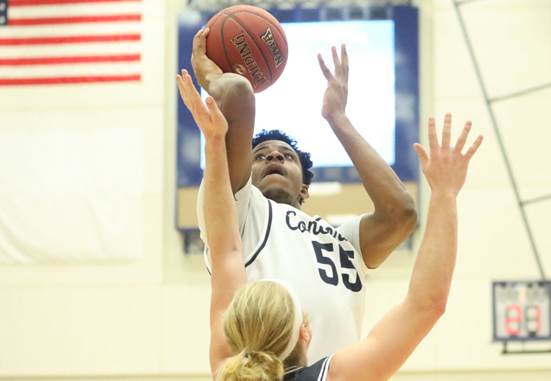 HASTINGS, Neb. – The treys weren’t falling like they were a day earlier, but the Concordia University men’s basketball team found a way to get it done on Saturday (Oct. 26) afternoon. The Bulldogs fell behind by seven points in the second half before pulling out a 74-69 victory over Friends University (Kan.) inside Lynn Farrell Arena as part of the Hastings College Classic. Tanner Shuck and Brevin Sloup supplied 17 points apiece.

Head coach Ben Limback’s squad also blew out Dakota State University (S.D.), 93-60, on Friday at the event. Concordia has jumped out to a 2-0 start.

“We didn’t shoot as well today, but it’s hard to match what we did yesterday,” Limback said. “I thought offensively we were a little stagnant, but I’m really pleased with the play of Sammy Adjei. He did some great things for us offensively. Justin Wiersema played really big for us down the stretch. It was a back-and-forth game in the second half and he helped inspire us to finish.

“It was a great test for our defense. We have to get better at defending the dribble drive. They really got to the basket on us. Overall it was great to get a win despite not playing our best.”

The defining stretch of this one came after Friends built a 51-44 lead at just under the 12-minute mark of the second half. An Adjei basket in the paint initiated an 18-4 run that flipped the script and provided a seven-point (62-55) Bulldog lead. Playing near his native Grand Island, Shuck capped that surge with a triple. Concordia never led the Falcons (0-2) get any closer than four points the rest of the way.

Limback would certainly like to see his squad shore things up when facing attacking guards like James Conley. He helped Friends hang in there by totaling a game high 24 points on 8-for-19 shooting from the floor. Neither team shot the three with consistency, but the Bulldogs had the advantage in overall shooting percentage (48.2 to 45.8).

Shuck, Sloup and Adjei (15 points on 7-for-10 shooting) were Concordia’s three double figure scorers. Limback used three starters for more than 30 minutes of playing time on Saturday. He feels pretty comfortable also going deep into the bench of a fairly experienced squad.

“It’s a challenge for sure,” Limback said. “There are some games where the matchups will be different. Everyone in the locker room has to be ready. The majority of them have played in the league so that’s great. The next guy has to be ready to pick up the slack. I do think our depth is going to be a strength of ours.”

Next on the docket is the 20th annual Cattle Classic, which will take place Nov. 1-2. On the first day of the weekend event, the Bulldogs will welcome Dickinson State (N.D.) to Seward for an 8 p.m. CT clash.